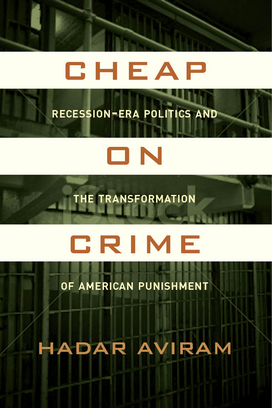 Dear blog readers - I have good news to share: My book, Cheap on Crime: Recession-Era Politics and the Transformation of American Punishment, has entered the production stage at the University of California Press, and will be available Feb. 2015!

Since the book idea sprang from this very blog, many of you may find it of interest. The book takes a broad look (nationwide, but with a focus on California) at developments in the American correctional landscape since the Great Recession of 2008 and sets out to understand the effect the recession, and recession-era politics and rhetoric, have had on penal policies.

The book relies on two theoretical foundations: critical Marxist social history, which predicts that hard times lead to more public punitiveness aimed at the lower rungs of stratified society, and public choice economics, which predict that during economic downtimes we'll only punish as much as we can afford. These two bodies of literature seldom speak directly to each other, but when read together they actually allow us to make sense of much of the punishment policies and practices we've seen in the last six years. The book identifies a new recessionary logic, humonetarianism, which allows politicians, lawmakers, public and private officials of all stripes to justify a retreat from the punitive policies that started in the Nixon era by calling for financial prudence and austerity. The book analyzes four components of humonetarianism: Scarcity-related rhetoric, the ability to generate bipartisanism and bring together strange bedfellows, new practices constrained by a leaner market, and new approaches toward inmates as burdens and service consumers. It also looks at the price we pay for advancing policies through cost rhetoric, makes some suggestions to social justice advocates, and tries to predict which, if any, of the changes we are making will remain in place when the economy improves.

I will be giving two talks about the book on professional panels in San Francisco this summer. The first talk will be at the Society for the Study of Social Problems and will focus on new perceptions of inmates.

The second talk will be at the American Sociological Association's annual meeting, whose general subject, Hard Times, is especially pertinent to the book subject. It will include an overview of the book's findings and themes.

When: Tuesday, August 19, 12:30-2:10
Where: San Francisco, either at the Hilton or at the Parc55 Wyndham (exact location TBA)
Panel Topic: Law in Hard Times: Economic Inequality and the Law

Publication events next spring will include a special book party at UC Hastings and an event at San Jose State University's Ann Lucas Lecture Series. There will be author-meets-reader events in various professional conferences and more book-related events - watch this space!

Please contact me if you'd like to host an event/book club/book party in the Bay Area, California, and Beyond, in early 2015.
Posted by Hadar Aviram at 12:14 PM