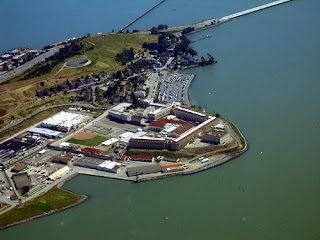 The Marin Independent Journal reported yesterday on the Governor's intention to sell San Quentin. The piece is very good, and brings up a variety of angles on the merits and costs of this initiative, including the recent costly innovations at San Quentin (such as the lethal injection chamber and the improvement in medical services) and the issue of costs. Here are some tidbits:

Marin officials Thursday cheered a proposal by Gov. Arnold Schwarzenegger to sell San Quentin State Prison, part of a plan to raise between $600 million and $1 billion to help close the state's budget deficit.

But although local officials who have long fought planned construction of a new $356 million death row complex at San Quentin welcomed the governor's change of heart, they stopped short of declaring victory.

The state recently spent more than $164 million on new medical facilities and $850,000 for a new lethal injection room to replace the cramped gas chamber that was deemed unacceptable by a federal judge.

California has also already spent $17 million toward the new complex for condemned inmates. San Quentin, which opened in 1852, has 639 inmates on death row.

State and Consumer Services Secretary Fred Aguiar said the governor has not decided where San Quentin's 5,150 inmates should go if the prison were sold, or which other prison would perform executions.

Aguiar estimated it would cost more than $350 million to move death row alone, because that's what the state plans to spend rebuilding the condemned unit at San Quentin.

Beyond the issues of feasibility and costs, this also seems to be a proposal of symbolic magnitude. San Quentin has been a fixture in the Bay Area scenery for a long time, and has more visibility in public discourse than many other correctional facilities.

Is this sale a good idea? What do you think?

Before selling off San Quentin, Gov. Schwarzenegger should deal with the death penalty first. Did you know if he would just replace death penalty with permanent imprisonment, we could save $1 billion in five years? Here's how:

• $125 million per year in costs for the current death penalty system. According to the California Commission on the Fair Administration of Justice, the annual cost of California's death penalty to the state is $137 million. If instead the worst offenders were condemned to permanent imprisonment, the cost would be only $11 million.

• $400 million for construction of new housing facility for death row inmates. According to the State Auditor, this is how much it will cost to build a new facility at San Quentin. Building at any other site will be even more expensive.

• Any attempt to "speed up" the death penalty will cost even more. The California Commission on the Fair Administration of Justice concluded that in order to reduce the time needed to review death penalty cases in California, the state would need to spend an additional $100 million each year on competent attorneys to represent poor people facing death sentences.

For a full analysis of the costs and consequences of California's death penalty, please see the ACLU-NC report, "The Hidden Death Tax: The Secret Costs of Seeking Execution in California," as well as our March, 2009 update.

Several states have certainly gone down this road recently, and this may be an opportunity for death penalty opponents to use the cost argument, and the impending move out of the facility, as leverage for death penalty abolition.

I'm for closing any prison. All I can say is, Sell sell sell.
After experiencing San Quentin first hand, this is sweet.

As you've pointed out, Snn Quentin is in the public eye - right smack in a major metropolitan area. Something I've noticed is that CDCR has a real fear of publicity, and prefers to do its own thing internally. Prisons, being closed environments, can be, and indeed are in many respects, a place where abusive conditions multiply very quickly when not under outside scrutiny.

Where we've seen improvements, in medical, and somewhat in mental health, is almost 100% due to scrutiny, and court orders - CDCR, left to its own devices, would never change.

As such, if San Quentin is to be closed it will be important for both the special master for Coleman, and the medical health receiver to re-double their efforts to monitor those prisons that will end up receiving San Quentin inmates, and to make it clear that other prisons are going to get the same level of public scrutiny that san quentin now gets.