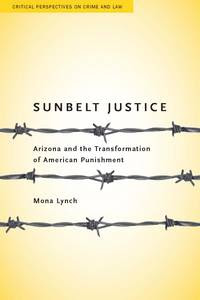 Mona Lynch’s new book Sunbelt Justice will hit very close to home for Californian readers. The book tells the story of the Arizonian correctional system, starting with the early twentieth century and ending with Janet Napolitano’s time as governor. It is a fascinating account, which those of us interested in California corrections will read like a good political thriller.

Two principles underlie the Arizonian correctional philosophy: an ethos of self-sufficiency, which led to a lack of sympathy toward offenders, and a dislike for large governments, accompanied by sentiments of frugality. The early days of Arizona corrections were shaped by these ideas. Unencumbered by a yet-nonexistent central command and headed by strong personalities, prisons and juvenile institutions were run on the cheap, relying on a combination of inmate work and tough discipline for their daily operations.

Things briefly changed during the late 1960s with the formation of the Department of Corrections, which was headed, in its initial years, by outsiders. Its first Director, Allen Cook, was a veteran of the California correctional apparatus, and brought with him the large bureaucracies and rehabilitative ideals that characterized California corrections at the time. Initially welcomed, Cook ended up overstaying his welcome. The series of outsiders that succeeded him – most notably McDougall, who brought with him a system of good credits and community corrections reminiscent of Machonochie and, more recently, Murton – were unsupported, and eventually ousted, by the state politics.

The reign of Director Sam Lewis and his successors can best be seen as a reinstatement of a “new-old regime”. Lynch does an excellent job presenting this era’s complexities. On one hand, it is very much in line with (or ahead of) developments that were occurring elsewhere in the nation: the disillusionment with the rehabilitative idea and the emergence of law-and-order politics. On the other hand, in the Arizonian context, it is a variation on the original old theme of harsh discipline and no rehabilitation, a nostalgic return to the roots, albeit with the complication of exponential growth in prison population and a much larger bureaucratical apparatus.

Particular emphasis is given to this transformative period between the late 1970s and mid-1990s; Lynch provides a multilayered account of state politics, federal prison litigation, and their detrimental impact on prison conditions.

It is illuminating to compare Lynch’s insightful and informative account with the parallel Californian history. Arizona was not nearly as committed as California to the rehabilitative ideal, and its early correctional style was much more “Texan” than Californian. The model of inmate farm labor, accompanied by harsh discipline, reminded me very much of the incredible footage in Susanne Mason’s Writ Writer. In that respect, the backlash of the 1980s felt much more like a “homecoming” to toughness and frugality. However, many features are familiar. The political shift to the New Right and the increasing centrality of crime control to political campaigns are very familiar. So are the various legislative acts and voter initiatives of the mid-1990s, which in Arizona, as in California, failed to take into account the disastrous financial effect of county-level increasing sentences on state-level corrections. Even victim initiatives, which are downplayed in Lynch’s account, are in the background, as in California.

The questions I’m left with have to do with the level at which history is made. Arizonian correctional history was shaped by strong personalities, who played, to varying levels of success, on a changing political arena. Is it possible to swing back the punitive pendulum, citing costs? That is what Director McDougall attempted to do in the early 1980s, with only limited and temporary success. This Arizonian lesson does not bode well for an era in California in which the only effective argument against punitiveness is related to taxpayers’ wallets. The other ominous lesson is that of the Supreme Court’s limited support for federal intervention in Arizona prisons, providing only weak support to Judge Muecke’s constant supervision and review of the state’s prison population and conditions. The Roberts court may exhibit a similar level of inhospitability toward the federal intervention in California. Under such conditions, forceful and innovative personalities can prevail only for a limited time, and the fate of the system is ultimately shaped by broader socio-political developments. Perhaps we are now in a better place, and state citizenry recognizes the unsustainability of our correctional monster. In the meantime, Lynch’s excellent book offers an opportunity for grim reflection.
Posted by Hadar Aviram at 2:16 PM

For some reason, the discussion on personalities and their role reminded me of Max Weber's old observation that societies are either "traditional", "rational-legal", or "charismatic" in their organization.

I lived in Arizona ten years ago. I remember an incident in which the "New Mexican Mafia" (Arizona's offshoot of La Eme but an enemy of the California original) came very close to assassinating the head of the state DOC in Phoenix after they followed California in implementing a version of the SHU program and sent all the validated STG members there.

It's quite possible for some societies to be more personality-driven than others, Tom, and it's certainly true in the correctional context. When I think about it, part of what helped Alexander Machonochie reform Norfolk Island was its relative isolation from British bureaucracy; it was Machonochie's little kingdom, where he was free to conduct social experimentation as he saw fit. Similarly, the era of Eyman in Arizona corrections allowed him a lot of leeway because there was much less of an apparatus to get in the way. These days, it's more difficult even for big personalities to swm against the current.