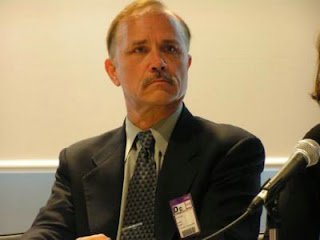 The religious freedom of inmates has been a central theme in prison rights litigation. The California prison movement has been transformed in important ways through litigation on behalf of Black Muslim inmates; for background on this, check out Christopher Smith's excellent paper or Eric Cummins' wonderful book The Rise and Fall of the California Radical Prison Movement. Following these cases, and others, CDCR employs a "five-faith policy", according to which it employs five paid prison chaplains in the following faiths: Protestant, Catholic, Jewish, Muslim and Native American. Now, a Wiccan clergyman, who has volunteered in California prisons for many years, is challenging this policy before the Ninth Circuit.

Patrick McCollum is a well-respected Wiccan authority, the author of Courting the Lady and a faculty member at Cherry Hill Seminary, a Neo-Pagan educational institution. He has testified before the U.S. Commission on Civil Rights on prisoners' religious freedom. According to the information on the book flap, McCollum began his service as a statewide Wiccan chaplain in 1997, after advising the State in a dispute involving a Pagan inmate. He is a member of the American Correctional Chaplains Association.

McCollum's case was defeated in the District Court, for a preliminary issue of standing. The District Court decided that McCollum lacked standing and could therefore not sue CDCR; the only people with standing to sue in such matters are current inmates, not people looking to be hired for the position. After all, said the court, at most McCollum could argue for CDCR to assess the limitation of chaplaincy positions to five, but even applying broader standards would not necessarily lead to including Wicca among the faith groups that merit a paid position, nor to hiring McCollum himself.

Interestingly, CDCR initially argued that, in assessing the need for prison chaplaincy positions, it applied a set of objective criteria: (1) liturgical needs, (2) the numbers of the group, (3) existing and alternative accommodation means, (4) security, (5) cost, and (6) other practical factors related to institutional operational needs. However, at a later stage CDCR stated that it never applied these criteria, though it intended to use it from now on.

The summary judgment decision has been appealed to the Ninth Circuit Court of Appeals. In a brief submitted to the court, Americans United for Separation of Church and State, the Anti-Defamation League, and other organizations, argue that the District Court's decision was erroneous.

Some of the arguments for and against McCollum's position are presented in this Opposing Views piece. Should there be standing in this case? Have McCollum's rights been violated? On the merits, does the "five faiths" policy constitute religious discrimination? Curious to hear what our readers think.

Here are some words from McCollum, in an interview included in the documentary A Hero Denied, which focused on the rights of Wiccan soldiers.

While the five-faiths policy does seem arbitrary, I have trouble seeing standing here myself. Given that there were no Wiccan prisoners here to potentially join the suit, say, on the grounds that their free exercise was being abridged, does McCollum even have any prospective constituents who are missing out? It almost suggests that he may be more interested in a paying position at the public teat than all that exercised (so to speak) about the ostensible merits of the claim, assuming that CDCR can bring him or another Wiccan cleric in to minister as needed.

I would say though that CDCR might be better off abandoning the firm five-faiths policy and instead perhaps applying those standards across the board in determining how many chaplains and from which denomination it needs to hire on a full-time basis, versus possibly summoning as-needed.

Oh, there's enough of a population out there. One possible reason why they're not joining is that they are getting McCollum's religious services for free, since he has been volunteering for CDCR for more than ten years.

Jeez. They should refile with prisoners as plaintiffs then. It would suck if McCollum had to maybe spend much persuading them or something... But if there's enough of a population, then there might be a demand for more than 1 chaplain for a state this big.

I remember chaplain access being an issue at times in the Corps here and there. There was usually only 1 chaplain per battalion on average, and usually a Protestant (I'm Catholic), so it would be hit or miss at times even digging up a priest to do a 10-minute Mass in the field, and that's in a service that's a third Catholic. Had to have been proportionally tougher for anyone who wasn't Christian.

Incidentally, there is a lawsuit pending on behalf of a Wiccan inmate who argues that his rights to lead a circle in prison (Sacramento State, I believe) have been violated. This is the latest I've been able to find on that lawsuit: http://docs.justia.com/cases/federal/district-courts/california/caedce/2:2006cv01527/151646/2/0.pdf/. Incidentally, this entire business could potentially be an interesting law student note.

At least one, possibly more, of the plaintiffs in this lawsuit is a Pagan inmate. That's why the suit is still alive. Patrick may have lost standing to sue, but other plaintiffs have not.

The DOCR's arbitrary list of five religions is really stupid, and entirely inaccurate in today's multi-cultural world. Prisons reflect the diversity of the population. Not all inmates fall into one of these five categories.

Just to clarify, there are approximately 2,000 Wiccan/Pagan inmates represented by me in the case. We tried to get certified as a class but ended up only being able to add about 10 inmates specifically as co-plaintiffs. Just so everyone knows, I met all of the prongs required by the law to have standing. I had additional injuries beyond the denial of being able submit my application for a job.

I suffered similar injuries to those suffered by the inmates, including having my life threatened by state administrators, being taken into custody on trumped up charges that were later dropped after being found to be untrue, being spit on, being assaulted by a state officer, being called a devil worshiper, and hundreds of other similar events. I also met the laws other 2 prongs. I have a "Confidential Relationship" with the inmate Plaintiffs as a chaplain, and the last prong which states that in order to have standing, my injuries would have be addressed if the court ruled in our favor, and they would.

I also am a taxpayer and the policy I'm suing against is specifically and narrowly identified as a line item in the California Legislative Budget, which is the one factor that clearly gives one standing under the taxpayer standing laws. What's really going on here is that the case is being manipulated in every way possible to deny Wiccans and other Pagans equal rights.

Thanks for your comment, Patrick. Please keep us posted with developments in the case, so we can update our readers.