One way of working toward solving the overcrowding problem is to allocate space efficiently. Reallocation of prisoners across the system based on needs is one way to do so without building new prisons. Today, in an effort to find more room for adult inmates, CDCR closed the systems' largest juvenile prison in Chino. The Examiner reports:

Authorities say they don't need the space for 400 minors, who were transferred to other facilities. Changes in state law have cut the number of youths in state custody as more go to county centers.

Instead, the Chino lockup will be retrofitted with an electric fence and other safeguards to house 1,200 adults - for much less than the $500 million it would cost to build an adult prison.

Those of you who have been following the juvenile facility situation know that Stark has been unfavorably reviewed by Books Not Bars, which found it to fail in every possible category. In that respect, the hope is that juveniles will find themselves in better environments. But another mystery concerns the decline in juveniles in custody that even made this arrangement possible. 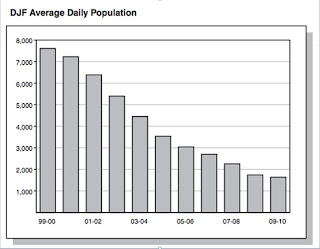 Why is the population at juvenile facilities declining? A 1995 report from the Legal Analyst's office predicted an increase in juvenile arrests and showed that CA was well above average in juvenile arrests and prosecutions. A later report from 2000 showed a decline in arrests, which it attributed to "the improved economy (and thus more job opportunities for young people), the decline in the use of certain drugs, and the relatively peaceful gang situation in urban areas." I don't know which of these are true today--#1 certainly is not--and am also not sure whether some of the continued decline we're seeing may be attributed to more juveniles tried as adults and held in adult facilities. The main idea, however, seems to be to divert juveniles to county facilities, so they can be closer to home, which makes a lot of sense.

Here are some additional theories about the mysterious decline in number of juvenile inmates: population moves, the use of alternatives to facilities, and my favorite--a decline in violent crime in general.

Thanks, Sumayyah. This, of course, raises serious chicken-and-egg problems: has the incarceration rate dropped BECAUSE the felony rate has dropped, or vice versa? How about the increase on both measures for adults?

Population moves are one to consider, just looking at the "supply-side" in the most basic sense. Between the cost of living and the lackluster quality of services, California is neither a cheap nor a very desirable place to raise children. I could see families looking to raise children, and particularly looking to raise more than one, probably preferring to do so elsewhere.

The census this year is going to provide us with a very interesting snapshot of the population under unusual economic conditions.

That may be part of the picture, Tom, explaining the tail end of the decline, but the CDCR numbers suggest that juvenile crime was on the decline since the early 2000s at least, during much better economic conditions. In fact, the improved economic situation was provided by LAO as one of the possible reasons for the decline (better conditions, better jobs for youth, etc).

Explaining crime rates is a mysterious enterprise. Some people, like Frank Zimring, argue that it's very difficult to know why crime rises or declines, and to which extent it responds to external conditions.The impact of imprisonment rates on crime rates is hotly debated.