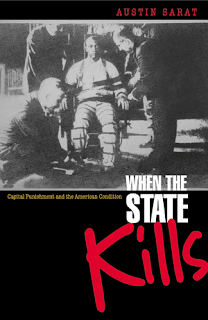 Jonathan Simon has a post up in which he criticizes the death penalty for being no more than an extended life sentence under harsh conditions with an end that makes a harsh punishment (life in prison, the sentence for Brown's crimes in Western civilized countries) into a non-punishment.

I have this to add: The absurdity of this week's last-minute litigation is further proof of the farce that the death penalty in the United States has come to be. If you do not believe that the death penalty should be abolished immediately on human rights grounds, you should at least agree that the farcical preoccupation with regulation minutiae and expiration dates of chemicals has completely emptied the death penalty of any possible meaning. Even those of us who still believe that the death penalty functions as some sort of a morality tale, warning people against committing serious crime (an assumption hotly debated between factions of econometric experts: see here and here), should now be able to see straight and acknowledge that its current form is a mockery of these objectives.

In his 2002 book When the State Kills, Austin Sarat discusses the transformation of the death penalty from a public display of monarchical force to a hidden, hypertechnical, bureaucratic procedure, occurring away from the public eye and offering little in the way of a public message. Some conservative commentators, such as Tom Harman, have explicitly stated that if legislators cannot reform the death penalty, in its current form it is untenable.

Of course, a possible reaction to this bureaucratization of state killings could be an outcry to minimize the possibilities of post-conviction review (and by doing so, minimize the opportunity to uncover and undo wrongful convictions) or to shoot or hang death row inmates in the town square. Some of the more disturbing anonymous comments on the internet expressed a willingness to engage in this sort of exercise. If these views are broadly shared (and they are not synonymous with abstract support for the death penalty, which, incidentally, wanes when respondents are presented with the life without parole option), then the American people are getting exactly the sort of justice they deserve.

I want to believe that American citizenry, regardless of where people stand on the death penalty, is better than this. Reflective, socially conscious citizens, whether supportive of the death penalty or not, deserve better than to have human lives on the line due to such hefty considerations as chemical expiration dates. Reflective citizens deserve to air the real issues--retribution, victim positions, acceptable state action--without being bushwhacked by evasive maneuvers on the part of the state.
Posted by Hadar Aviram at 7:14 AM

But we love farce here in America... (http://en.wikipedia.org/wiki/The_Three_Stooges)

We set up flawed institutions so we can complain about them later. Also, we have shallow debate about topics like these. Is the death penalty moral? Even if the answer is yes, the next logical questions are, is it practical, can it be sustainably performed, is it worth the cost necessary to execute it? Of course those questions are considered by committees and commissions, but they rarely seem to factor in the voting/enactment of laws, whether by the legislature or by the people.

Democracy's advantage is not its perfection, but that it is a tree that bends with the winds without giving. If we wanted the best governance we'd have philosopher-kings. Hopefully, with the economic dire straits we as a state find ourselves in, we can look at flawed institutions such as the death penalty and reassess the practicality and the value of the death penalty as an institution.

"Reflective, socially conscious citizens, whether supportive of the death penalty or not, deserve better than to have human lives on the line due to such hefty considerations as chemical expiration dates. Reflective citizens deserve to air the real issues--retribution, victim positions, acceptable state action--without being bushwhacked by evasive maneuvers on the part of the state."

May I be so temerarious as to suggest that the reason we quibble over such technical minutiae (e.g.: drug expiration dates) is because the broader debates (on, e.g.: human rights and acceptable state action) have largely already been satisfactorily resolved, and the minutiae is all that there is really left to debate? There was a Chronicle (I think) poll this week on capital punishment that found 61% support for it in the Bay Area, and if that's the attitude here, there's a good argument that we've probably reached a national consensus in favor of the death penalty on human rights and acceptable state action grounds. That leaves little other than technical details to discuss (or, perhaps, to stall and cavil over, depending on one's perspective).