CDCR has just released its recidivism report, which is fairly detailed and merits some discussion. First, I think these reports are a good start and CDCR should be commended for tracking down the information and analyzing it. The Office of Research did an overall good job at highlighting some of the major issues and, while i'm sure more could be mined from the raw data, there is enough content to comment on. Here are some points that come to mind, in no particular order:

The recidivism rates in general, while not surprising, are disheartening, and attest to the complete failure of our prison system in achieving deterrence, rehabilitation, or both. It is telling that the statistics haven't changed significantly over time, despite increased punitive measures. Clearly, what we are doing under the title "corrections and rehabilitation" does not correct OR rehabilitate. The percentages are particularly distressing for people who have been incarcerated at least once before. 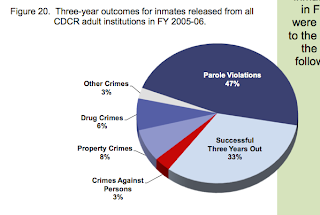 Some interesting demographics: The report tracks people up to three years after release. Almost 50% reoffend within first six months; at one year, the percentage rises to 75%. Women recidivate at much lower rates than men (it would help to have a breakdown of this by offense, because perhaps offense patterns matter here). Unsurprisingly, recidivism declines with age. Also, recidivism rates for first-time offenders are highest for Native Americans, African Americans, and White inmates. But these effects dissipate for re-releases.

The releases from prison are unevenly distributed across counties (a large percentage of released inmates goes to LA). However, most of the folks that end up in LA are first-time releases, which explains why the recidivism rate in LA is actually the lowest. Other counties, such as SF, Fresno, and San Joaquin, have the highest recidivism rates, but they receive re-releases (for whom the rates are higher in general) more than first-time releases.

The distribution of offenses is interesting. 20% of released inmates were in for serious/violent crimes, and this percentage holds for recidivism, so it would appear that people do not "graduate" to more serious crime (perhaps they just do more of the same). Also, there doesn't seem to be a connection between seriousness of crime and recidivism (which might suggest that it's the institutionalization that contributes to it). Also, the report doesn't track a connection between the original offense and the re-offense, save for sex offenders. Notably, however, 47% of returnees to prison are brought back in because of parole violations.

Re sex offenders: This category merits special attention because it's the one most often targeted by punitive legislative energy. 6.5% of released people registered as sex offenders. The data suggests that sex offender registration slightly reduces recidivism. However: Only 5% of released sex offenders who recidivate are convicted of an actual sex offense. 8.6% commit an unrelated crime, and 86% are back on a parole violation. This speaks volumes about the pervasiveness of registration rules and limitations and about the low risk of sex offenders. 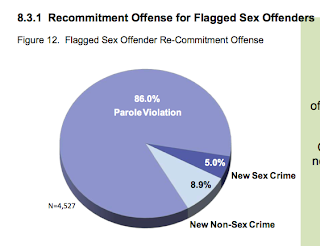 More than half of the released inmates are in for short sentences - but for recidivists the length of sentence grows (this is probably just the effect of previous offenses enhance sentencing or of repeated parole violations.) There is a rise in recidivism for people who serve 0 to 24 months. After that, the rates decline. Possible intervening variables are health and age. 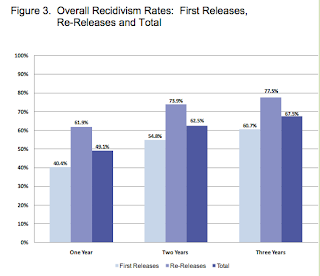 Recidivism rates rise significantly for folks released after their second incarceration (although subsequent re-incarcerations don't make much of a difference). The returnees are also more likely to be assigned a high "risk score". These two findings are not unrelated; I imagine that, when using the CSRA tool for predicting recidivism, one predictor of "high risk" is repeated prison sentencing. This classification therefore probably feeds itself.

On a more general note, I hope that releasing the data also means that our judicial apparatus might rethink some of its policies and approaches. In Malcolm Feeley and Jonathan Simon's 1992 piece The New Penology, they argue that our "actuarial" approach to justice is behind a transformation from external correctional goals (e.g. reducing recidivism) to internal goals (e.g. reduce riots and escapes). If someone is keeping track of recidivism data, let us hope that the data actually gets used.
Posted by Hadar Aviram at 2:27 PM

"Only 5% of released sex offenders who recidivate are convicted of an actual sex offense. 8.6% commit an unrelated crime, and 86% are back on a parole violation. This speaks volumes about the pervasiveness of registration rules and limitations and about the low risk of sex offenders."

Despite examination of the FACTS, our legislators and the public have gone on a witch hunt in regards to released sex offenders. The public is less afraid of a released MURDERER.

Here is an interesting article about an ex-offender who started an internet company to rehabiliate himself.