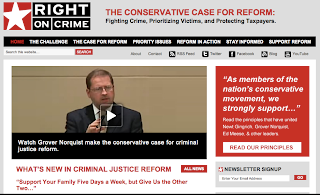 This week's L.A. Times features a piece by Richard Fausset on conservative politicians who transcend the "tough/soft on crime" traditional divide to support prison reform -- for humonetarian reasons.

Now, with most states suffering from nightmare budget crises, many conservatives have acknowledged that hard-line strategies, while partially contributing to a drop in crime, have also added to fiscal havoc.

Corrections is now the second-fastest growing spending category for states, behind Medicaid, costing $50 billion annually and accounting for 1 of every 14 discretionary dollars, according to the Pew Center on the States.

That crisis affects both parties, and state Democratic leaders have also been looking for ways to reduce prison populations. But it is conservatives who have been working most conspicuously to square their new strategies with their philosophical beliefs — and sell them to followers long accustomed to a lock-'em-up message.

Much of that work is being done by a new advocacy group called Right on Crime, which has been endorsed by conservative luminaries such as former House Speaker Newt Gingrich, former Education Secretary William J. Bennett, and Grover Norquist of Americans for Tax Reform.

The right's embrace of ideas long espoused by nonpartisan and liberal reform groups has its own distinct flavor, focusing on prudent government spending more than social justice, and emphasizing the continuing need to punish serious criminals.

Even so, the old-school prison reform activists are happy to have them on board.

"Well, when the left and the right agree, I like to think that you're on to something," said Tracy Velazquez, executive director of the Justice Policy Institute, a Washington think tank dedicated to "ending society's reliance on incarceration."

Julie Stewart, founder of Families Against Mandatory Minimums, even believes that Republicans, with their tough-on-crime credentials, may have a Nixon-in-China cover to push reform further than Democrats.

"There is a safety conservatives have," she said. "And for better or worse, Democrats don't always have that luxury."

The Right on Crime website features Reagan's decarceration efforts and welcomes influential figures, such as Broken Windows theorist George Kelling.
This group embodies the spirit of humonetarianism. The message is all about retreating from mass incarceration based on considerations of fiscal prudence. One of the more promising aspects of humonetarianism is the potential for rethinking deeper aspects of incarceration policies after questioning them based on the fiscal consideration, and indeed, the group embraces traditionally "lefty" concepts such as restorative justice, a libertarian take on overcriminalization, eliminating mandatory minimums, and support for geriatric parole. The website has a wealth of information, abundant links to research, and much conservative knighthood clout.
The question, of course, is the extent to which this new and wise move among conservatives will find a good home among the New Right tea party-ers.
---------
Props to Colin Wood for the L.A. Times link.
Posted by Hadar Aviram at 8:39 AM

Just like the alleged 'hawk' Ronald Reagan could negotiate and gain the trust of the country during the cold war, and the alleged 'liberal' Bill Clinton signed into law health care reform, it will take conservatives to undertake and pass serious prison reform. Check out what the conservatives in Kentucky is doing... giving 1...2... even 3 chances to drug users in rehab... don't lock them up, help them and we all win in the long room.