Numbers of Parolees at Large: An Exercise in Data Presentation 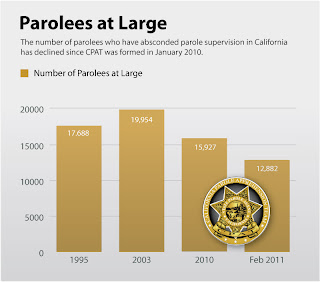 (image courtesy CDCR website)
The CDCR website features a story about the Division of Adult Parole Operations' success in bringing about a decline in the numbers of parole absconders in California since the formation of the new Parole Apprehension Team. That, in itself, could be good news (provided that these people should've been under parole supervision in the first place). We'll set aside for the moment the heftier discussion of the growing resemblance between parole operations and policing, and the erosion of the concept of parole as an instrument of hope (read Mona Lynch's terrific ethnography of parole agents for more insight on this mentality). We'll also set aside the question whether reporting a decline in absolute numbers makes sense in an era of supposed parole reform, a regime that ostensibly should focus on high risk parolees and thus produce less parolees in the first place. And we'll even set aside the question of how many of these apprehended absconders were the high risk, violent, dangerous parolees that the public should really be concerned about (hint: the answer is "not many", as many of the absconders are GPS noncompliant sex offenders, whose recidivism rates are among the lowest). Instead, I challenge my readers to take a look at this graph from the story and come up with at least three different faulty things in the data presentation.
Posted by Hadar Aviram at 9:27 AM

The biggest problem I have with the table is the nonstandard collection of times: 1995, 2003, 2010 and 2011 Are they trying to tell a story about what a program did in the last year, or about what caused the apparent peak in 2003?

And the first award goes to---Dale, for identifying the messy X-axis!

But wait, there's more. Anyone want to add?

Using counts may not be helpful. I like proportions or rates much better.

Aaaaaand... Robert takes the lead! Yes, what PERCENTAGE of the parolees are at large? Maybe we simply have fewer parolees, in which case the numbers are meaningless?

How about that there was a larger decline from 2003 to 210 than there was after CPAT was established? This suggests that factors other than CPAT may be contributing to the decline.

How about that the decline from 2003 to 2010 was larger than the decline that supposedly occurred "because of" CPAT?

Yes! Which then requires some attention to intervening variables.