Today's Prison Law Blog, an outfit I like and respect, features a guest post by Peter Wagner from the Prison Policy Initiative. Wagner tries to make an anti-gun argument based on a graph depicting gun homicide and gun production. 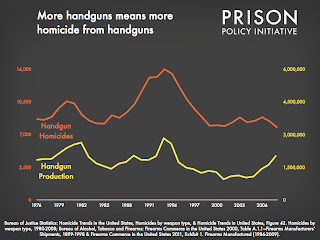 Here's what Wagner would have you conclude from this:

The gun lobby would rather not talk about the correlation between the production of handguns and dying. The evidence there is clear. So the question, then, is whether the gun lobby is trying to distract from the problems that guns cause, or are they trying to create them?

I'm no big lover of guns, believe me, and I firmly believe in strict regulation to prevent deadly weapons from being in the wrong hands (of course, sometimes that can't be helped, unfortunately.) But I do believe that if one wants to make a serious argument based on data, one should read data accurately and honestly.

Take another look at the graph. If Wagner would have you believe that gun production causes gun homicides, wouldn't gun production have to precede gun homicides? The graph shows quite the contrary. Homicide rates peak before production rates rise. If so, the graph tells us the implausible story that gun manufacturers are responding to the demands of homicidal maniacs. Since only a fraction of all guns sold are used for homicide, that's not only nefarious, but also rather unlikely. Also, note that for the last five years in the graph, gun production goes up and gun homicides decline. The decline probably has to do with various factors that have nothing to do with gun production (read more about this in Frank Zimring's new book). This bivariate correlation is close to meaningless.

Accusing the right of alarmism, panic-mongering and inaccuracy doesn't really work if one resorts to the same tactics. And if you want to make a serious argument for gun control (and there is one to be argued), take the care and diligence to argue it properly.