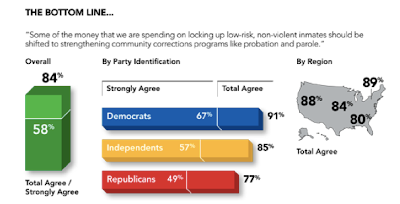 A while ago we discussed the question whether Californians were punitive, and offered a slew of sources that suggested that, when people are aware of the costs involved in the correctional monster, their level of punitivism decreases considerably.

Pew Center on the States' new report offers encouraging news to anyone who, like me, believes that the financial crisis has changed the landscape of American corrections in fundamental ways.

Some key findings:
These is no coincidence. I maintain that the financial crisis, and the growing public attention to fiscal prudence, is impacting public opinion like never before. Brown v. Plata and an increased media focus on prison expenditures increased the visibility of prisons, who had been invisible to the public eye prior to the crisis. The discourse is changing; policies are changing; and now, public opinion is changing, too.
Posted by Hadar Aviram at 10:24 PM