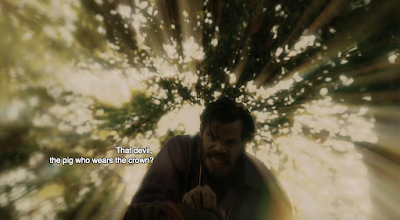 Two major themes emerge in Episode 3 of Aquarius: the two main characters as embodiments of the two criminal justice models and the fragmented and complicated image of Manson painted by the show.

The first half of the episode, and some scenes in the second half, see Hodiak helping Shafe solve the murder of Art Gladner, for which Shafe's informant was falsely arrested. The investigation takes Hodiak into the noir-like environment of a strip club ("burlesque theater", the owner corrects him). There, he uncovers a drug connection, which leads him to the culprit. It turns out that Hodiak himself contributed to the chain of events that led to the murder: by writing "snitch" on Gladner's forehead, he marked him for execution; and, by breaking the new suspect's arm, he advertised to the other players in the drug business that the suspect was under police control and surveillance. Hodiak does not seem to harbor any guilt or discomfort about his complicity, and his confrontation with Shafe floats this to the surface:

Shafe: He was a person.
Hodiak: Who sold drugs.
Shafe: You're unbelievable. Whatever you want, you do it."
Hodiak: It's true. I can be a tad brusque".

This dialogue, again building on the buddy-cops trope, highlights for 21-century viewers the transformative moment in American policing. Two important developments clash in the years immediately preceding this scene: the emergence of Mapp, Miranda, and Gideon, part of the Warren Court's criminal procedure constitutional revolution, and the arrival of Richard Nixon to the Presidential seat, and with it efforts at bolstering and funding local police stations to counter the revolution.

If you will, the two officers are personal embodiments of Herbert Packer's Two Models of the Criminal Process. Hodiak embodies Nixon's commitment to the crime control model, where the police and prosecution are imbued with immense power and discretion and anything goes as long as crimes are solved and criminals brought to trial quickly and efficiently. By contrast, Shafe embodies the Warren Court's commitment to the due process model, both in terms of adherence to constitutional requirements like the Miranda warnings and in the commitment to equality, illustrated also by his personal life (in this episode, an unknown neighbor paints the words "nigger lover" on his garage, intimidating his wife and child.) For Shafe, the worst thing that can happen is a procedural mistake leading to a wrongful arrest. For Hodiak, it's delay in solving a crime.

These political perspectives are generational, too. Hodiak is a WW2 veteran, with a clear idea of right and wrong, leading him--three years before Daniel Ellsberg would leak the Pentagon papers--to assume that the war in Vietnam is justified and that his son, gone AWOL, is a war criminal. Shafe seems to be a Vietnam or Korea veteran, capable of seeing more shades of gray.

These aspects of the show, at this point, strike me as more interesting and convincing than the Manson family scenes. It seems that the show has a difficult point pinpointing Manson's image: is he a religious leader? a common pimp? how much of his eventual terrifying violence is already in evidence through his malevolence? We see Manson enchanting girls with two-bit New Age speeches that might have been more effective in the Sixties; we also see him controlling and domineering them, treating them as property. But we also see him performing great violence, often with his signature knife. At the same time, some of the lines given to Manson have him effectively expose the destructive hypocrisy of the 1960s; his words to Ken, who comes to him at the bottom of his spiral of shame and self-hatred, are apt. After a particularly heartbreaking and distressing search for furtive sex in a park bathroom (a good reminder of how far we've come), Ken accuses Manson of making him a homosexual:

Ken: You did this to me.
Charlie: I freed you.
Ken: You broke me.
Charlie: You were already broken, Ken. I just pulled you out of your shell.

Manson's perspective, of course, is far more in tune with our modern perspectives on homosexuality. One has to conclude that even a broken clock shows the right time twice a day.
Posted by Hadar Aviram at 4:33 PM