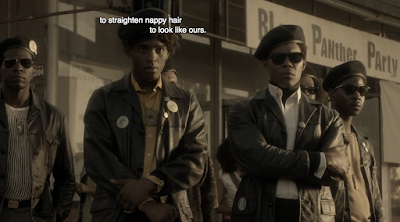 Episode 4 of Aquarius is an exposition of hypocrisies--in domestic law enforcement, in foreign policy, and in personal life.

At the forefront of the episode are two murders: the one Sam Hodiak is investigating, an intra-racial crime within the black community, and the one no one is investigating, the murder of a black teenager named Michael Younger in the hands of a white cop ("chokehold" is said to be referred to as "cop hold".) When Hodiak comes to investigate the former, the message from the Black Panthers, on behalf of the neighborhood, is that they will not collaborate, nor will they hand him the suspect, until the other murder is solved and the culprit, a police officer well known to them, brought to justice. Among the Black Panthers is the man Hodiak falsely arrested in Episode 1, who tells him:

By "it", does Sam refer to Bunchy or to himself? Bunchy accuses him of being "a racist cop in the most racist police force in the nation." Perhaps moved only by the will to secure cooperation on his own investigation, or perhaps realizing a bit of the broader structural problem, Hodiak investigates Younger's murder. He and Shafe crack it and prepare to go to internal investigations. But Cutler, promoted to lieutenant now, stops them. "You think that, after Watts," asks Cutler, "this department going to admit a white cop killed a black teenager?" Shafe's incredulity about the department's decision to bury the murder, and his awakening to the bitter news about the status quo, will undoubtedly echo in many sympathetic post-Ferguson viewers' thoughts, made more bitter because of the passage of time.

But Hodiak has his own awakening to go through, too. His son, Walt, has gone AWOL. Having served in covert ops in Cambodia, he has realized that the plan is "saturated bombing, killing children, arming crazies, destroying that civilization." Hodiak is not blind to the atrocities of war or to the president's deceit about the Cambodia front, but his moral compass is elsewhere: "if you want to win a war, you got to fight ugly sometimes." But Walt is undeterred and plans to leak what he knows to the press.

Finally, the Manson girls' care and concern for each other (if only as fellow disciples) is contrasted, again, to the hypocritical sham marriages of, well, pretty much everyone else, such as the Hodiak and Karn families.
Posted by Hadar Aviram at 5:59 PM