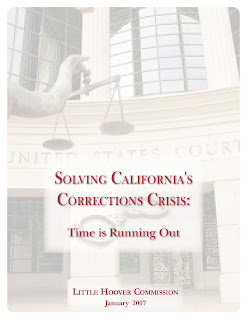 The Little Hoover Commission is an independent state oversight agency that has published a number of important studies on California Corrections.

Among the Report's key recommendations:


-- "The state must take back control of the prison medical
system, by developing a plan to work with an organization that can run the system for the State."

-- "The State must immediately take action to improve its management . . . and implement the recommendations made by this and other commissions, including expanding in-prison programs, improving prisoner reentry, and reallocating resources to communitybased alternatives."

-- "The State must re-invent parole, moving to a system of post-release supervision for certain prisoners to ensure public safety."

-- "The State should begin a comprehensive evaluation of its sentencing system by establishing an independent sentencing commission to develop guidelines for coherent and equitable sentencing guided by overarching criminal justice policy goals.

Another must read!
Posted by A. Rappaport at 3:23 PM