Focus on Proposition 6: How To Deal With Gangs and Other Matters 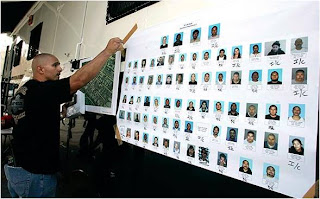 Proposition 6, or the Safe Neighborhood Act, proposes a variety of changes to the CA criminal justice policy. The main idea behind it is addressing street crime from a "war on crime" perspective.

One of the most important things to keep in mind when considering Prop 6 is its financial implications. Currently, CA is allocating $600,000 to law enforcement, and this proposition will raise this amount by $350,000 (a 50% increase). One source provides the breakdown of these additional funds by topic. The question, therefore, is twofold: whether, as voters, you agree with the philosophy that has driven the proposition, and, if so, whether you are comfortable with its costs.

Some of the major and substantive proposed changes include changing evidence rules to allow hearsay, i.e. a victim's testimony at the police station, in cases in which the victim is later unavailable to testify. "Unavailability" is broadly defined to include situations in which the victim refuses to testify due to trauma. This idea is not as innovative as it might seem in the American context; other countries have broad exceptions to the hearsay rule, brought about in the conservative 1980s as a response to concerns about organized crime and victim intimidation. It seems that this rationale is also behind the proposed new offense, penalizing any activity of preventing or dissuading victims from testifying and complaining to the police, as well as acts of retaliation against victims.

Prop 6 includes several other new offenses; all of these acts seem to be punishable under current criminal laws, and I expect their proposed criminalization is more of a proclamation than a practical change. These include tampering with one's electronic monitor; driving or taking away other person’s vehicle (year in jail or fine); and graffiti (year in jail or fine). A point of interest about this last one: if juveniles are unable to pay fines for graffiti, their parents may be responsible.

Which is where we come to one of the main focal points of Prop 6: the issue of gangs. the US in general, and CA in particular, has struggled with gang-related polices for many years now. The philosophy behind much of what we have done so far regarding gangs assumes that gang membership is conducive to crime, and that one way to fight gang-related crime is to fight the gangs themselves, before any crime has been committed.

One such early attempt to control gang-related behaviors involved using criminal law to prohibit gang members from congregating. In Chicago v. Morales, the criminal prohibition for gang members to "loiter in public places" was held to violate the Due Process clause due to its vagueness and the broad discretion it leaves to law enforcement officers. But the newer generation of gang-related policies seems to be much more targeted. My student Adam Maldonado, who has done some research on civil gang injunctions in Los Angeles and in San Francisco, found that they prohibit specific gangs from congregating in specific, carefully-defined areas. These areas include, in San Francisco, the Mission, Hunter's Point, and Western Addition, including a 3-by-4 block not far from Hastings. He has also found that, before an injunction is applied, the gang needs to be thoroughly researched by law enforcement agencies, so there is "clear and convincing evidence" that it constitutes a "public nuisance" (People v. Englebrecht (2001) 88 Cal.App.4th 1236, 1256). 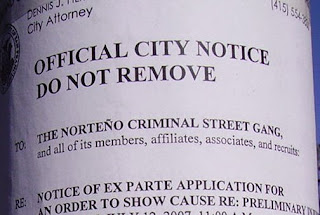 How does Prop 6 impact gang-related policy? To start, it adds provisions that make a gang into a legal entity. A gang can be sued, and Prop 6 adds mechanisms by which its members can be served with papers on behalf of the gang, which simplify the process of injunction and potentially other processes of legal dealings with gangs as such. It also includes a list of 33 offenses, ranging from serious violence offenses to much less serious property offenses, which, when committed by a minor in a gang context, would enable CA to try the minor as an adult. Also, the punishment for a long list of felonies is doubled if these are committed in the context of a gang.

Prop 6 also requires more research into gangs, including a registry; failure by a previously convicted gang member to register might be a felony or a misdemeanor, depending on the content of the original conviction.

Other miscellaneous changes included in Prop 6:
o allocating $10,000,000 for conducting background checks on public housing recipients
o excluding the possibility of bail for illegal aliens charged with violence or gang-related crimes (of particular interest in light of San Francisco's recent "sanctuary city" expose);
o banning O.R. release for violent offenders without a hearing, and placing limitations on OR for violent offenses in the context of guns, parole violations, and others;
o tightening notification to parole authorities of any parolee behavior, ranging from offenses to technicalities (contrast with Prop 5, which advocates a softening of parole revocation based on technical violations);
o allocating funds for reentry programs; however, by contrast to Prop 5, the emphasis is on monitoring and supervision (through GPS devices, etc).

Stay tuned for the last post in the series, discussing some aspects of Prop 9.
Posted by Hadar Aviram at 5:50 PM