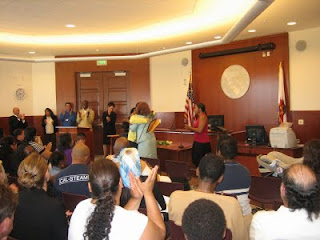 It seems that Jeff Adachi's reservations about the Community Justice Center (as expressed here and here), which are not unrelated to the Public Defender's Office's dramatic budget cuts, are not an isolated phenomenon. Yesterday, the National Association of Criminal Defense Lawyers released its report on drug courts.

The NACDL's broader concerns address the basic model through which we address drug crime. The report advocates shifting our perception of drug addiction from a criminal justice problem to a public health issue, which implies decriminalization (in the spirit of these trying times, the budgetary implications of legalizing marijuana are mentioned). However, the report realistically acknowledges that wholesale decriminalization is unlikely in the near future, and therefore turns to discuss policies in drug courts, which have gained increasing support and momentum since the establishment of the first drug court in 1989.

Within that context, the review raises various concerns about disparities and violations of constitutional rights in the drug court processes. The report points out the jurisdictional variation in admission criteria. The concern is that non-systematic criteria are being used, or that systematic criteria, such as excluding violent offenders altogether, might lead to the exclusion of mentally health offenders. NACDL protests this practice, which they call "skimming", and which leads to a preference for the easy cases. They are particularly concerned with the underrepresentation of minorities and indigent defendants. There is particular concern with the fact that prosecutors act as gatekeepers in many jurisdictions (a practice forbidden here in CA, through Prop 36). As to concerns about accessibility, mechanisms should be put in place to ensure the availability of drug courts to minority and poor defendants, including transportation to and from the court, and avoiding deportation of immigrants who have successfully completed the program.

NACDL also takes issue with the way criminal processes are handled by the court. The court sabotages discovery proceedings and suppression motions. Any arguments against police behavior, egregious as they may be, lead defendants out of the courts and into the "real" court for litigation purposes. The report raises the classic defense attorney's concern: the privilege against self incrimination. Defendants, the report argues, should not have to plead guilty before accessing treatment; there is nothing lost by adopting a pre-plea, pre-adjudication model. The court must insist that the state have a triable case, and immunity should be granted to all information divulged in drug courts. Ex-parte communications should be diminished. Also, the judge supervising the treatment should not be the judge hearing the case after termination.

Another source of concern is the price paid by defendants who try the program and fail. The price of unsuccessfully attempting to treat oneself should not be vindictive sentencing.

One of the NACDL's main beefs with the administration of some drug courts is with what the report sees as a misperception of the defense attorney's role. Zealous defense, they argue, is often viewed as obstruction of the therapeutic goal and an inability to "think outside the box". This problematic approach stands no only in the way of zealous and creative advocacy, but also in the way of attorney-client privilege (particularly problematic when counsel has information on drug relapses). Two problematic practices are resorting to limited-retainer agreements, in which the lawyer handling the case in drug court is shut out from the other aspects of the case, and having "stand-in counsel" in these courts rather than one committed to the specific client. The Defense Bar must have a more active role in shaping drug courts.

The report argues against a misallocation of public resources. Drug courts are an expensive option, which should be reserved for high-risk defendants facing long jail terms. Low-risk defendants should be diverted to less costly options, such as "under the radar" programs and case dismissals.

NACDL make their recommendations in this video, as well. All administrative materials used for the report, as well as the hearing transcripts, are online.


The report is rather concise and methodical, and it represents, of course, the perspective of defense attorneys. One possible argument I would raise is with the selection of defendants for the court. While access to all regardless of class and race is a must, I think that the likelihood of success is a legitimate criterion for selection. In a therapeutic program, therapeutic, rather than criminal, concerns, should guide admission. However, we should ensure the therapeutic nature of the program. Not an easy thing when our approach to substance abuse is entangled with criminal law inflation and moral hysteria.