The CDCR Annual Report, which we began discussing here, provides some important information on the composition of the CA prison population, which might help decipher some of the mystery behind overcrowding.

In an interesting piece published last year, John Pfaff argues that prison population growth is not so much a factor of lengthy sentences (through such legislation as Three Strikes) but more of an increase of inmates serving short sentences. He also cautions against assuming that most of the population increase is a product of parole violations. His study, however, did not include California. The numbers provided by CDCR do not provide a conclusive explanation of what is going on, but they do allow some thought about the source of overcrowding.

Here, for example, is a snapshot of the breakdown of new admissions to CA prisons. 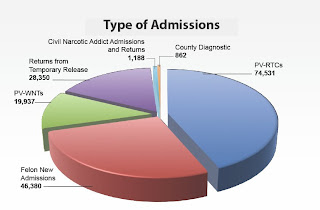 As we can see, a large percentage of new admissions, albeit not the majority of them, is due to parole violations. When focusing only on people admitted to prison for new offenses, the following picture emerges: 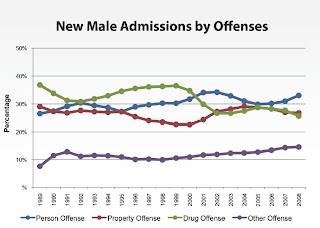 What about the Three Strikes Law? The numbers of second- and third-strikers seem to be rather low. 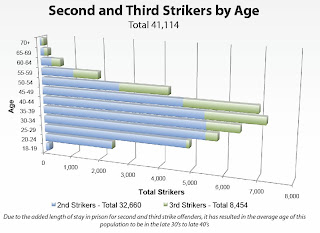 Note that, while these lengthier incarcerations account for only a very small percentage of all inmates, their advanced age and medical expenses might account for a large part of the CDCR budget.

Stay tuned for an analysis of the parole data.
Posted by Hadar Aviram at 2:15 PM

Since you brought up the question, here's a discussion of the subject. It was written prior to seeing the annual report, which is also being studied at this site:

Thanks for the link, Anonymous.

I’m personally concerned about the striker population as it potentially could snowball into a large population of lifers, which is becoming a much larger segment of the population already. The fact that we have some 32,000 second strikers that with only a wobbler crime could become lifers is frightening. It is the use of such wobblers that has produced so many third strikers. As an example 690 third strikes were for simple drug possession, 351 for shoplifting and 181 for receiving stolen property. Although California’s DA’s have used more discretion in the last nine years that could change if public outrage of Three Strikes dies. It is important to note how many Three Strikes convictions occurred in the first 6 years of the law.

I understand your concern, Frank, and am not discounting it. It may be the case that there were many convictions in the early years, prior to the prosecution's disenchantment with the law, which now serves as a powerful plea bargaining tool. It is important, however, to demystify the numbers and understand where they come from. Overcrowding has many causes and it's easy to demonize one aspect of the process at the expense of others.

My Congratulations Hadar !!! You make a good work overthere.