Humonetarianism in Cuts: Voters Concede to Prison and Park Cuts 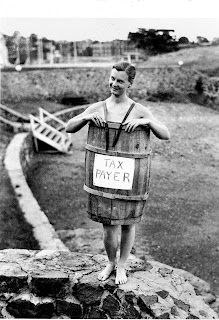 Today's Chron reported about a field poll conducted in CA in early March. Respondents were required to suggest areas suitable for spending cuts. Almost no public service was mentioned, which is not surprising (and is the reason why policymakers are better than the public in thinking budget issues through!), the public did mention only two areas in which the state should cut spending:

Gov. Arnold Schwarzenegger's budget proposal for next year actually satisfies the top preferences of those surveyed. He has proposed an $811 million cut in prison health care spending and the elimination of spending on parks. He suggests replacing the $140 million to parks with money generated by a lease for oil drilling off the coast of Santa Barbara.

Still, if those two cuts are enacted, they would amount to less than 5 percent of the overall budget shortfall.

The question is, of course, what aspect of prison spending the public would be comfortable with. Would it include rehabilitation and reentry programs? Would the public approve of the suggested health care cuts? How would the public feel if no new prisons were built? Or, does this support extend to decriminalization, early releases, and parole reform, for saving purposes? Some research we discussed elsewhere suggests that budgetary concerns would lead the public to support such reform, but this poll, apparently, was concerned with the entire budget and therefore did not go into detail.
Posted by Hadar Aviram at 10:33 PM

Speaking as somebody who's tried a couple of times to poll on these topics in the past, I can tell you the public doesn't know. They're hoping somebody, somewhere is educated enough on the details to cut smartly, and they sense generally that the recent prison buildup was not money well spent, but average voters cannot talk details. Most, if asked, likely could not correctly distinguish probation from parole.

Look at California corrections spending overall: If it's like Texas, 80%+ goes to prisons, so that's where cuts must primarily come from to affect most of the budget. Moreover, as a functional matter, to cut prison spending one must actually INCREASE community supervision spending for the offenders who are either released early or diverted on the front end. So some types of (cheaper) spending on supervision must be increased - to create intermediate sanctions facilities, intensive-supervision probation caseloads, etc. - in order to safely cut prison budgets overall. But it's up to the wonks and numbercrunchers to figure out how to do that smartly. The public is uneducated about the details and they can't be reasonably worked out through opinion polls.

Very true, Scott. Which is partly why the initiative process is particularly harmful to budgeting. Budgeting corrections is such a complicated task, involving long-term considerations, that it's somewhat unfair to expect the public to exhibit knowledge.

"it's somewhat unfair to expect the public to exhibit knowledge"

Unfair, and dangerous. Even foolish. I've never been a "power to the people" kind of guy. This is primarily because I know a lot of people and in general find that more often than not, empowering them would do more harm than good, both in general and on criminal justice particularly. "The people" want more services and less taxes, but that doesn't mean it's wise or even possible. Ditto for those who want to "lock em up and throw away the key." We're past the point where that's a credible position. Texas releases about 75,000 prisoners per year!

I hope some of the CA reform groups (or you academic types) are busy preparing alternative cuts to propose (that include investments in community supervision, if you follow models from other states). This is a golden, Golden State opportunity but somebody has to make it happen politically on the ground or the institutional players will push to protect all the prisons and cut all the treatment and probation programs, which is the opposite of what should happen.