There is so much going on in this New York Times piece, I hardly know where to begin.

A convicted sex offender has moved into a home across the street from Wildwood Elementary School in Piedmont, infuriating parents, who are asking school officials and the police why the 2006 state law mandating a minimum distance of 2,000 feet between schools and the residences of sex offenders is not being enforced.

But the Piedmont police, on the advice of county and state law enforcement officials, say there is nothing they can do.

As it turns out, the 2,000 feet requirement is unenforceable, because while it contains ex-ante provisions, it does not include an ex-post sanction for violators. This sort of legislation--like the one we showcased earlier today--screams symbolism, demonization, and electoral appeal, rather than practicality and prevention.

The story itself includes all the elements of sex offender policy and panic: a horrible redball crime discovered that inflames the discussion, an account of the unintended negative consequences of the law (many transient registered sex offenders), and plenty of interviews with concerned parents. Note these interesting comments, including the neighbor's paternalist concern for the registered offender himself:

District Attorney O’Malley, who sits on the management board, said officials across the state spent a disproportionate amount of time on where registered sex offenders lived.

“With Jessica’s Law, the residency restriction component has been an enormous challenge,” she said, adding, “It has probably taken up a huge portion of our time and attention over the last year in just trying to figure out how to support locals to keep their communities safe.”

John McWeeny, who lives adjacent to Ms. McCaffrey, said that as a neighbor and parent of two children who attend Wildwood Elementary, he was “disturbed” by the situation.

“A hundred kids probably walk by these houses every day on their way to and from school,” Mr. McWeeny said. “You could throw a rock from here and hit it. This can’t be a good environment for him either.”

But this story also includes a prominent class element. The setting for this community affair is the affluent Piedmont neighborhood, the images of which are on the heading of this post. As it turns out, the only place where there sex offenders can live in compliance with the Jessica's Law 2000 requirement is Hunters Point. 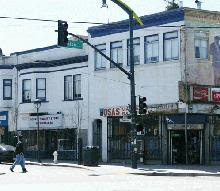 It is a sad commentary on the Bay Area, that the school requirement is a good index for the relative affluence of the different vicinities. And an even sadder aspect of it is that Hunters Point becomes a site of banishment for sex offenders, driven away from the more affluent communities.

Not surprisingly, there is commentary from George Runner, who has plenty of experience generating "not in our backyard" class-based banishment of released inmates:

State Senator George C. Runner, Republican of Lancaster and an author of the proposition, bristled at the idea that it was inadequate. The Piedmont situation is “outrageous,” Mr. Runner said, but he rejected the idea that the law was to blame.

Parole officers had the responsibility for ensuring adherence with the law, he said.

Mr. Runner also suggested that the law should be enforced at the local, not state, level — which in this case would mean that it fell to the Piedmont City Council to address the situation.

Sometimes I just don't know what more to say; this is really a textbook example of doing everything as badly as possible. Public safety isn't helped. The symbolic, futile, unenforceable message is thwarted and becomes a vehicle of hate. Class differences raise their ugly head, spearheaded by politicians whose allegiances are defined by class and locale. Different issues, which require different treatment, get mixed up with each other. The entire affair reminded me very much of a scene in the excellent 2006 movie Little Children, based on Tom Perrotta's excellent novel. In this particular scene, Ronnie, a registered sex offender well known to the parents of this affluent suburb, goes to the pool on a hot day. The movie does not take sides with regard to registration; Ronnie is a fairly sinister, albeit miserable and pitiable, character. Note the complexity and the subtlety of the movie's portrayal of community panic, and the delicate hand with which it portrays the class aspect of the disturbing event. The police materializes within seconds; the community congregates around the swimming pool. What a powerful scene; it looks like something out of Durkheim or Kai Erikson.

Email ThisBlogThis!Share to TwitterShare to FacebookShare to Pinterest
Labels: criminalization, dangerousness and risk