Cause for Concern: What California Should Learn from Hawaii's Experience 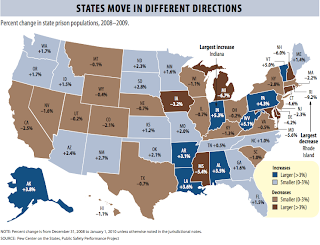 As promised here, I've inquired and read further into the correctional situation in Hawaii. Hawaii imprisons less people than CA, and certainly less per 100,000 residents (338 to California's 471 in 2007). The recent decline in prison population in 2010, however, was twice as impressive in California than in Hawaii.
But the reason Californians should carefully examine the situation with Hawaii has less to do with the bottom-line numbers and more to do with the method of incarceration. According to Meda Chesney-Ling and Kat Brady, Hawaii is particularly notorious for housing its inmates off-state, mostly in private facilities on the mainland. More than a third of Hawaii's inmates are on the mainland. This is a much more drastic than the condition in CA, which I referred to elsewhere as "the inmate export enterprise". This move, hailed as a cost-saving measure, is now seriously questioned, and a recent audit attributed this move to "artificial cost figures derived from a calculation based on a flawed methodology, designed entirely on what is easiest for the department to report." The new governor, Neil Abercrombie, is thankfully rethinking this strategy, and reestimating that bringing home some of the prison population would "easily add millions more to the state budget".
We once discussed the question whether housing an inmate away from home is less conducive to rehabilitation. There are, however, other immediate concerns. Being housed away from family, friends and a supportive environment, makes an inmate far more vulnerable to attacks, as the distressing stories of Hawaii female inmates sexually assaulted in a Kentucky private facility and male inmates corporally punished in Arizona demonstrate. Despite the fact that this 1997 story paints Texas incarceration of Hawaiians in a positive light, the inmates interviewed mention the difficulties of being away from family and completely detached from the cultural context of their daily lives (Hawaii disproportionately imprisons Hawaiian natives). This CCA story about Oklahoma tells of efforts to change this sense of displacement, but it appears that the problem runs much deeper than that.
There are good reasons why Californians should pay close attention to this seldom-reported phenomenon. The concern is, of course, with other twists and misinterpretations of the Plata/Coleman order. Even if construction is lagging behind (and perhaps because of the delays), the option to ship more California inmates away to CCA facilities around the country is still very much on the table. Sending away more inmates may prove countereffective, and for some inmates, disastrous.
-------
Many thanks to Meda Chesney-Lind for helping me with more information on this.
Posted by Hadar Aviram at 8:42 AM