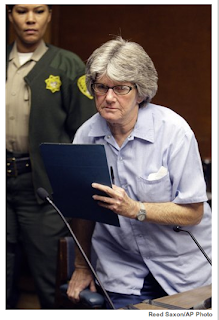 (Image courtesy AP and the Sac Bee)
A while ago we reported on the parole denial for Susan Atkins, a member of the Manson "family" who died a year and a half ago of a terminal illness after spending decades in prison. This morning's Sac Bee reports of a similar hearing regarding another member, Patricia Krenwinkel. As in the Atkins case, the reason for not granting parole were retributive; her efforts to rehabilitate in prison were outweighed, said the parole board, by the heinousness of the crimes. But in addition to this assessment of the seriousness of the crime, and the victim impact statements, there was some talk of the symbolic effect of the crimes:

This is a crime children grow up hearing about," said parole commissioner Susan Melanson. She said they had received 80 letters from around the world advocating Krenwinkel's continued incarceration. "These crimes remain relevant."

There is no question parole boards are influenced by public opinion. It is a good question whether they should be. Should the notoriousness of a crime and its symbolic baggage impact parole decisions? What do our readers think?
The other interesting aspect of the Krenwinkel hearing is related to remorse issues. Here's the Sac's take on Krenwinkel's performance before the board:

"I'm just haunted each and every day by the unending suffering of the victims, the enormity and degree of suffering I've caused," Krenwinkel said.

She was soft spoken and contrite in response to board members' questions, describing the downward spiral of her life after she met Manson and came under his spell.

"He sang to me and made love to me," she said. "...I left everything and went with him. He seemed like the answer to my salvation.".

Because of him, she said, "Everything that was good and decent in me I threw away."

It was her late father, she said, who helped her realize during his visits to her in prison, "what had happened, and the monster I became."

And here's the response from the prosecutor and victims:

"If Patricia Krenwinkel has remorse, I don't see how she could walk into this room," said a tearful Anthony Di Maria, the nephew of Jay Sebring, who was killed along with Tate. "No punishment could atone for the cold-blooded murders in this case."

Los Angeles Deputy District Attorney Patrick Sequeira also suggested that if Krenwinkel was remorseful she would waive her parole hearings and accept her punishment.

These are interesting comments. They suggest that, for someone convicted of a truly heinous crime, there is no way to show remorse except not showing it and accepting one's punishment. That is, that showing remorse and seeking release from imprisonment are incompatible. Setting aside the particulars in Krenwinkels' case, this premise seems to evoke the religious undertones of the original penitentiary - seeing the prison as an institution for understanding the full meaning of one's bad deeds and redeeming one's soul through serving one's time. These goals shaped the American prison from its early days; the isolation method at Eastern State Penitentiary (which we visited in late 2009), with no one to talk to except for the pastor and nothing to read but the Bible, were designed by Quaker reformer with those exact aims in mind.
While assuming that our version of a correctional system is a suitable vehicle for fulfilling this goal may be somewhat naïve, there are bigger questions here about public perception or expectations regarding remorse. As a society, it would be a good thing to reflect on how we expect remorse to be expressed in the criminal process. Stephanos Bibas and Richard Bierschbach have suggested integrating remorse and apology into all parts of the process, precisely because of its healing properties. If parole hearings are seen as unsuitable venues for expressing remorse (because the offender has something to "gain" from expressing remorse), perhaps the answer to the problem is expecting remorse to be expressed when the offender does not stand to gain from it. That, however, generates two problems. The first is potential lack of honesty on the part of offenders who might repeatedly express remorse they do not feel so that it might later count at the parole hearings, and as a result a decline in the moral value of remorse. The second problem is that, as a society, we do believe that defendants should benefit in some ways from remorse. The Model Penal Code recognizes abandonment (when internally driven, albeit not necessarily by remorse) as a defense in attempt cases (here's an interesting take on that in the context of a recent 8th Circuit case). So, how do we reconcile our desire to acknowledge someone's remorse in the trial and sentencing phases with our wish that the remorse be "authentic"?
Posted by Hadar Aviram at 8:00 AM

Just when does saying I'm sorry count for something? I think this is a much bigger question than just in a parole hearing. Do people say I'm sorry to make themselves feel better or as an apology those who they have offended.

Must we trust the person making the apology in order to accept the apology?

Making abandonment an official premise of criminal law offers a complex answer to that, Jim. On one hand, we're willing to acknowledge that someone could go back on their intention to commit crime. On the other, we want to see external markers of this transformation, in the shape of stopping an attempt from completion. I would therefore say that American law is willing to acknowledge remorse more the more evidence there is that the person in question has tried to reestablish that trust.

Perhaps I can integrate the Manson "family" cases with the crisis of corrections in California.

To me, there are two reasons for prison: to rehabilitate, and to keep dangerous people away from society. And I'm afraid that the Manson "family" crossed the line way too far to be integrated back into society, and I am more than willing to spend my tax dollars to keep them where they are.

On the other hand, I agree that most people who go to prison simply go because poverty (and racism) squeezed them into committing what the State considers crimes. I do believe that if we legalized drugs retroactively, and if we set up alternative sentencing for petty crimes, a huge chunk of those incarcerated would be freed and the prison population would be lowered. Then we would have more money to keep the more dangerous people behind bars.