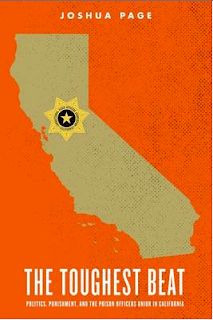 California has often been proclaimed ungovernable, its politics described either as too dense to fathom or, in an oversimplified fashion, as a mess generated by unfettered direct democracy and shortsighted financial policies. But some astute political actors have accrued the knowledge and skills to navigate these complex political seas, and the California Correctional Peace Officers’ Association (CCPOA) is one of them.  Joshua Page’s new book The Toughest Beat  clearly and intelligently transcends theoretical abstractions and simplistic clichés to provide a sobering, thorough analysis of the CCPOA’s role in shaping California’s penal policies, and in doing so, provides an excellent primer to the entire landscape of California politics and decisionmaking.
The book begins with a detailed, fascinating history of the rise of the CCPOA from an “old boys’ club” providing social opportunities and camaraderie for its members to a powerful player in state legislation and policy. Using a myriad of sources, in the tradition of “old-school,” well-done ethnographies, the book cleverly tells this story oscillating between the macro world of the state and national contexts and the microcosm of specific personalities. Don Novey‘s role as the architect of the CCPOA’s lobbying and influence strategy is particularly highlighted. Emphasis is placed on the CCPOA’s bipartisan alliances with Democracts (with respect to union concerns) and Republicans (with respect to punitiveness concerns).
This account is followed by two somber chapters, which illuminate the role played by CCPOA in shaping penal policies. The first reveals the complex interdependency between the CCPOA and a few victim organizations, such as the Crime Victims United of California; the latter organizations, representing the interest of specific demographics and a particularly punitive and vengeful victim perspective, were effectively created, managed, and puppeteered by CCPOA. Rather than flinging radical accusations and conspiracy theories, Page’s careful analysis of this web of interdependency and coalitions is understated and backed with hard evidence, including a personnel and finances analysis and ethnographic data. The CCPOA’s wisdom in fostering such mutually beneficial coalitions with victim organizations, district attorneys, sheriffs, and wealthy private citizens, is grimly shown to prove itself in the following chapter, which analyzes, blow-by-blow, the passage of the Three Strikes Law, California’s pioneering piece of punitive legislation. While the story behind California’s return to determinate sentencing, and the subsequent story of its romance with an ultrapunitive sentencing regime, are a larger story than that of the CCPOA, the union played a pivotal role in selected phases, and was a dominant factor in swinging the punitive pendulum. This account is an indictment not only against CCPOA, but against a system in which the idea of direct democracy is marred by a reality of unregulated funding, misleading advertisements and abundant disinformation and ignorance.
But Page’s book cannot be reduced to a good guy/bad guy formula. His masterful account of the CCPOA’s epic fight against prison privatization shows the different strategies employed by CCPOA and the private prison corporations, and relies on a deep, intuitive understanding of how the state works to explain how, despite resorting to nefarious techniques such as building a prison on speculation, the private companies did not prevail.
The book reads like a fascinating political thriller. It does not resort to extremism or unfounded proclamations, is concisely written, and is refreshingly free of jargon. Page’s reliance on Pierre Bordieu’s field analysis as his theoretical framework is light-handed and nimble; the theory facilitates, rather than obscures, the book’s clear narrative. It is a book that professionals and laypeople alike would appreciate and enjoy.
I take issue with two minor aspects of Page’s analysis. Firstly, in presenting the punitive background for the rise of the CCPOA, Page paints the “era of rehabilitation” and indeterminate sentencing in nostalgic, overly rosy colors. While the rhetoric and logic of rehabilitation and positivism governed the penal field in California, studies of actual incarceration practice and conditions reveal a grim picture of cruelty, hard labor in the guise of correction at the time, not to mention the arbitrary sentencing practices which dramatically disfavored minority and poor inmates. Determinate sentencing led to a great many evils in California’s correctional system, but it was preceded by a great many evils in its prior regime, which many activists and legal professionals fought to eradicate for all the right reasons.
Second, Page portrays the CCPOA in two somewhat contradictory ways: As an astute political player, who will choose alliances according to what suits its members’ narrow interests, and as an ideologically-committed “law and order” player. I am curious as to which of these frameworks he finds to be a better descriptor. When presenting the CCPOA’s involvement in the creation of Three Strikes, Page refers to it as an “exception” to the “nonintervention rule” regarding sentencing matters, adopted by the union, but his analysis of the involvement and ideological choices made could also regard Three Strikes as a pivotal moment in CCPOA policy, in which it morphed into an ideological player. As Page grimly reminds us at the end of the book, despite CCPOA’s support of sentencing commissions and seemingly more reasonable positions, its powerful, debilitating shadow still looms large over any attempt to reform the correctional system, and its interests in hindering such reforms go beyond its union objectives.
Notwithstanding these minor critiques, The Toughest Beat is a terrific read, and I highly recommend it not only to readers interested in penal policies, but to anyone interested in the inner workings of the political system in the Golden State.
Posted by Hadar Aviram at 5:24 PM