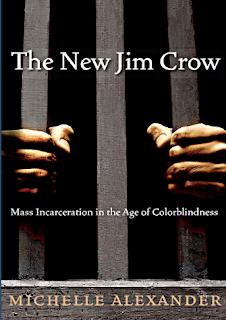 A couple of months ago I attended a dinner fundraiser by the American Friends Service Committee and had the pleasure of hearing Michelle Alexander speak about her book (full video of the speech, as well as an interview with Alexander, available here.) I immediately bought a copy of the book and was very much looking forward to reading it. It did not disappoint, and while its basic argument is not novel, the book presents it in a compelling, engaged way.

The New Jim Crow is an attempt to take the prison-slavery comparison, often made as hyperbole, seriously. In order to do so, the book begins by providing a basic and concise introduction to race relations in the United States before, during, and after slavery. Readers unfamiliar with the post-reconstruction nadir of American race relations would do well to examine the particulars of life at the time, because, as Alexander demonstrates, much of the racial discrimination we see today through the correctional system has its roots in the disenfranchisement and separation of those days. Simply put, in the aftermath of the Civil War, the seeds were planted for a thriving system of discrimination and segregation that would utilize very similar methods to create a caste system, originally based on the color of one's skin, and now using one's status as a felon as proxy for said color.

The following two chapters provide a basic summary of the criminal process, relying for the most part on Supreme Court cases, and demonstrating how racial biases permeate the process from policing till release from prison. Readers with legal and socio-legal backgrounds may find these chapters somewhat oversimplified and spot some inaccuracies, but for a general audience this overview clearly communicates the message: A seemingly colorblind system is loaded with opportunities for discretion that generates the overrepresentation of African American men in the criminal process, and by exposing them in vast disproportion to this horrifying experience, generates an underclass deprived of a share in American conformity.

Alexander sets out to show that the role of race in the criminal process and in mass incarceration is not accidental. This argument, in itself, is not new. In her 1999 book Making Crime Pay, Katherine Beckett provides a full analysis of the political campaigns of the late 1960s and clearly shows how Nixon, and other candidates, relied on fear of crime and rising crime rates to confront, head on, the civil rights movement of the 1960s. The Warren Court's lenient approach to defendants, and its tendency to generate bright-line rules limiting the discretionary powers of the police and prosecution, became the enemy, and was a thinly-veiled foil for the 'real' enemy, race inequality. Alexander's book, however, makes this argument more accessible to the general public. By substituting crime for race, Nixonian politics succeeded in combating their real enemy, while maintaining a façade of race-neutrality.

My favorite chapters of the book are the last ones, in which Alexander takes on the broader implications for society of a caste system driven by crime control. She discusses the impact of criminal record and inmate disenfranchisement on a complete alienation of the African-American community from the political process and from access to basic necessities and rights. And, she sounds a loud wake-up alarm to those who have basic sympathy to the idea of criminal justice reform and race equality but who may not have made the connection explicitly. The ideal audience for this book, whom Alexander mentions in her introduction, would be folks who think that the comparison between Jim Crow and mass incarceration is merely rhetorical hyperbole. Upon reading this book, they may be convinced otherwise.
Posted by Hadar Aviram at 9:37 AM