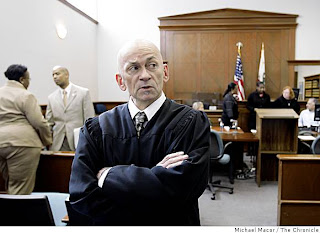 (image courtesy SF Chronicle)
The Chronicle reports this morning that the Community Justice Center opened its doors yesterday for the very first time. The article documents the CJC's history, including the struggles for funding that we examined here and here.

In the traditional court system, defendants are given citations and told to appear at the Hall of Justice in 45 days. But many of them are homeless or struggling with mental health or substance abuse problems, so remembering a court date several weeks later is unlikely. At the new court, people will be arrested and seen by a judge within days - and in the same neighborhood where the crime occurred.

Getting people to show up is just one of the many challenges that have plagued the court since Newsom borrowed his idea from Manhattan's Midtown Community Court, which is credited with turning around the once-notorious Times Square.

The court, which has been replicated in cities around the world, sentences perpetrators to a mix of community service to pay back the neighborhood and social services like mental health or drug treatment to address underlying issues. The idea is to keep perpetrators from cycling in and out in jail.

I found the Chron report to be surprisingly negative. In its subheadings, the article reports that "even voters rejected court", and somewhat ridicules the fact that the first five "clients" of the court were no-shows (a very common phenomenon at the Hall of Justice as well). I have no horse in this race, but at the risk of sounding over-protective, I wish the Chron had given this a fair chance before introducing the gloomy undertone.

At the last town hall meeting, Commissioner Albers and coordinator Tomiquia Moss were very conscious of their accountability to the community, and said they would closely monitor their progress and report to the public. Part of this includes external evaluation, and I understand that the RAND corporation will be pursuing a study of recidivism rates among CJC defendants. Program evaluation takes time; look at what the Red Hook Community Justice Center has achieved since it opened its doors in 2000. We already know that the old program doesn't really work. I would urge Chron writers, and readers, to reserve their judgment of the new program until there is actually something to judge.

I hope the collaborative justice blog will provide us with updates on the new court's function.