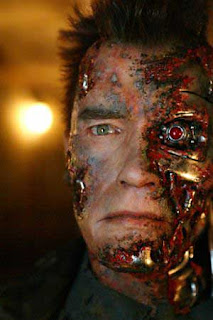 Here's an update to our continuing coverage of the medical services litigation; this round of the fight over funding the prison medical services, it seems, goes to the receivership. Yesterday, the District Court addressed the state's refusal to pay Kelso the first $250 million dollars mandated by the court, by reinstating contempt proceedings against the Governor for declining to do so. The Chron reports:

In Wednesday's ruling, the court said the state had acted prematurely in appealing an order Henderson issued in October to pay $250 million as the first installment of a plan by the receiver, Clark Kelso, to build new medical and mental health centers and renovate existing ones.

Henderson said the money was available in a bill the Legislature had approved, and scheduled a hearing in November to hold Schwarzenegger and state Controller John Chiang in contempt of court for withholding the funds. Officials who are found in contempt can be jailed, but Henderson said he planned to assess financial penalties against the state until it complied with his order.

The state won a stay from the appeals court while judges reviewed the issue. But the three-judge panel dismissed the appeal Wednesday, saying Henderson's order would not be final until Schwarzenegger and Chiang were actually held in contempt.

Lisa Page, a spokeswoman for Schwarzenegger, said the governor would keep urging Henderson "to recognize the fiscal restraints facing California and the excesses included in the receiver's construction plan." She declined to say whether the governor would comply with Henderson's order to pay $250 million.

Kelso's lawyer, James Brosnahan, said the ruling clears the way for a trial on contempt, "something that nobody wants to do, but we'll do it if we have to."

As explained in the Sac Bee, this is slightly more complicated because of Tuesday's ruling by the 9th Circuit Court, according to which the state's argument against Judge Henderson's order is still premature.

A three-judge circuit panel said in a 15-page opinion it does not yet have jurisdiction over the issue because Henderson's order is not final, "but is rather an interim step." . . .

The state had maintained Henderson's order amounted to an injunction, which would be appealable, but the three circuit judges rebuffed that argument as well. "Although the state presents important questions, which may be matters of first impression, concerning the 11th Amendment, the PLRA, and the prison construction program as a whole, none of those challenges has been properly raised in the district court," the panel said.

However, while the opinion was issued Wednesday, it was obviously written before Henderson's Tuesday order rejecting the state's motion to terminate Kelso and his construction program. In that order, Henderson did address whether he has overstepped boundaries imposed on him by the PLRA, finding he has not.

The judges pointed to Henderson's orders creating the receivership and mandating the state's obligation to fund efforts to bring inmate health care into line with the Constitution's Eighth Amendment bar on cruel and unusual punishment.

Not only did the state not contest these orders, it consented to them, the judges recalled. They remarked that the state's consent "may affect or even negate its claim of 11th Amendment immunity … and … the claim of violation of the PLRA."

Incidentally, Schwarzenegger says he is not running for another office.

Schwarzenegger. . . explained that he has more freedom to make policy decisions (including tax increases, a break from past campaign promises) precisely because he doesn't have to run for another office. . .

The governor is termed out in January 2011, and he has never said what he will do once he leaves his Sacramento office.