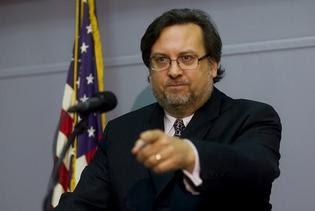 Another attack leveled at the medical system receivership - this time, on the receivership employees' salaries. The Sac Bee reports:

Last year, seven of 26 staffers – including two part-timers – still were paid more than the $225,000 annual rate earned by corrections chief Matthew Cate. Eight enjoy large Department of Corrections and Rehabilitation pensions on top of their salaries.

And prison doctors and nurses dominate the state's best-paid roster. More than 240 doctors or nurses, state employees overseen by the receiver, were paid more than the $226,359 earned by the state prison department's medical chief.

The receiver's request to raise salaries was granted by the court in 2006 in order to "improve quality of care, help fill vacancies, reduce cost of contractors".

The Fresno Bee has a somewhat more forgiving take on the salary issue:

The first federal receiver earned far above what a public service mission entails -- a salary and benefits package of $620,000. The current receiver, J. Clark Kelso, hired a little more than a year ago, earns $224,000 -- in line with the California corrections chief's pay of $225,000.

Now, after a year in office, Kelso has eliminated three positions and shifted most of the remaining 25 receivership positions to state pay scales. That's the right approach and will save a few million dollars.

But beyond focusing on receivership salaries, Californians ought to keep in mind the major driver of staggering costs for prison medical care: The state imprisons too many old, feeble and chronically ill prisoners no longer considered dangerous.