CCC Field Trip: Past, Present and Future Prisons in Philadelphia 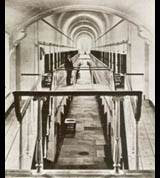 This week I have been away from California, at the American Society of Criminology annual meeting, which took place in Philadelphia. The conference itself was very dense and there were many interesting papers and roundtables (including an excellent panel devoted to David Johnson and Frank Zimring's new book on the death penalty in Asia); however, what really moved and excited me was my morning visit to the Eastern State Penitentiary, the oldest modern prison in the United States, and possibly in the world.
As readers versed in penological history probably know, Eastern State Penitentiary owes its unique design to Quaker reformers. Quakers had always been interested in issues of criminal justice and corrections (among other things, their publication Struggle for Justice is credited for fueling the left-wing prong of the determinate sentencing movement); in this case, they aimed to reform previous correctional institutions, which kept prisoners together in large cells with abundant violence and very little in the way of sanitation or basic living conditions.
The alternative was to be a true penitentiary; a place that would turn the inmate's attention inward and encourage reflection and true remorse. For this purpose, prisoners would be placed in solitary cells and in absolute silence. They would have no contact with the outside world, no books to read save for the Bible, and no communal work to be done. Their brief exercise break would be enjoyed in a solitary yard surrounded by tall walls.
The irony is, of course, that today's Quakers have come to see solitary confinement as an evil, taxing the prisoners' well-being and sanity, and are strongly advocating against it. Here is their shocking and sad report on the effects of solitary confinement in California prisons.
The architecture designed to ensure these conditions, designed by John Haviland, is truly a marvelous feat, considering that construction took place in the early Nineteenth century. Its imposing facade, complete with gargoyles, reveals little of the interesting features within. The prison is built as a panopticon, with a central area from which one can see into each and every one of the cellblocks. The panoptic design, enabling efficient and immediate surveillance, was later adopted in many prisons around the world.

There were, of course, many documented violations of the silence requirement; prisoners did attempt to speak to each other through holes and pipes. Such transgressions were severely punished. At the same time, a rivaling system in New York had prisoners working in communal areas, but in complete silence. This innovative perspective delighted visitors like Alexis de Tocqueville, but horrified others, like Charles Dickens, who considered it worse than any form of physical torture.
In later years, the Penitentiary abandoned the solitude requirement, relaxing the conditions somewhat and creating a communal exercise yard, complete with a baseball diamond.
Some of the more notable inmates' stories are presented in the excellent audioguide; for example, that of a brave inmate - a free Black man - who helped free his wife from slavery and was convicted and imprisoned in Pennsylvania for doing so (incidentally: cell blocks were segregated until 1961). Al Capone's cell, complete with luxury items he was allowed to keep by the grace of the guards, is also restored.
After this fantastic visit, I had an excellent meal at Mugshots, a cafe across the street, where I found Grid magazine. Among various uplifting reports on sustainability initiatives in Philly, I found a delightful piece about City Harvest, a project which enables Philadelphia inmates to grow vegetables and feed the city's poor and hungry citizens. Beyond the project's practical benefits to the city, it provides a healthy, growth-oriented environment for the inmates, who learn some work skills and some basics of agriculture and nutrition. I was very moved by the fact that, as one of the people interviewed in the article mentioned, many of these imprisoned men and women had never had a chance to work in a green environment or be in close proximity to nature before.
Thinking about these projects, after visiting the prison, made me hope that we will do a better job learning from the mistakes of the past to envision a better future, and that we never let a grand program steer us away from basic human concern for society's weakest link.
Posted by Hadar Aviram at 4:04 PM

Email ThisBlogThis!Share to TwitterShare to FacebookShare to Pinterest
Labels: rehabilitation, the big picture

(Still catching up on posts a little. Been busy and you've got such interesting stuff.)

A very close friend of mine lives in the Finger Lakes region of upstate NY, near Auburn, where the New York model was developed, so I know a little about this distinction.

I've found it interesting that the panopticon princple is still in use, probably even more so today than when Eastern State was built. If you look at a lot of prisons built in the last 30 years or so, the open and closed podular designs do even more to put every cell within view of one CO than Eastern State's radial design did.

Absolutely. In fact, the early panoptic design by Bentham opted for a podular structure, and some of the diagrams in Foucault's Discipline and Punish show exactly that.