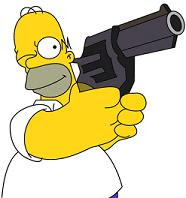 As the chronology of California correctional policies shows, many of the punitive measures in sentencing, corrections, and risk management, emerged from voter initiatives. Whether or not the public is punitive, or is being pushed in that direction by politicians and the media, and what can be done to change public opinion, are complex and delicate questions that we discussed in a previous post. Today, I'd like to turn to the findings of some recent work, pointing to the fact that some potential voters and jurors, namely, white males, are more punitive than others.

In a recent piece, Michael Costelloe, Ted Chiricos and Marc Gertz measure public punitivism as a factor of various worldviews, among them what they call "economic insecurity." As it turns out, people tend to be more punitive, and their belief in rehabilitation and second chances declines, when they feel that their own economic situation will worsen over time. This effect is particularly salient among white males; Costelloe et al attribute this connection to a sentiment that welfare policies, and giving people a break, rewards the underserving and comes at one's own expense, a sentiment which they find overrepresented among white males.

This weekend I received more confirmation for this finding, albeit in a different context. Mona Lynch and Craig Haney's recent study, presented at the Conference for Empirical Legal Studies, used mock juries of 4 to 7 jurors, who were shown a video of a death penalty trial and asked to deliberate the case. The study was masterfully done, providing the jurors with two identical versions of the video - except for the races of the offender and the victim. The clothing and acting of the different witnesses was exactly the same; the only thing manipulated was race. As Lynch and Haney found, white male jurors were significantly more likely to sentence the black defendant to death. These findings had ripple effects. White males were overrepresented as elected forepersons, and they exhibited the power to sway the other jurors in a punitive direction. As the following chart depicts, juries with a higher concentration of white male jurors tend to differentiate more between white and black defendants when deliberating and deciding on the death penalty. 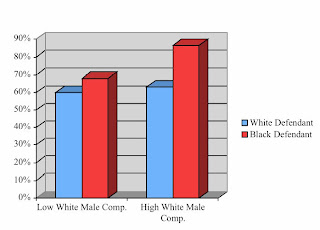 What is going on? Lynch and Haney explain the findings by arguing that white male jurors tend to exhibit less empathy toward black defendants. This echoes the argument by Costelloe et al, according to which economic anxiety and lack of empathy are related.

What are we to do, though? Exclude white males from voting on initiatives and serving on juries? Of course, not all white males lack empathy and are punitive. But the next time the propositions come around, or the next time we serve on a jury, we should ask ourselves how our demographics, experiences, and biases, impact our opinions about crime.
Posted by Hadar Aviram at 12:39 PM

Just catching up on a few blog posts. Interesting. Almost the opposite side issue from Batson v. Kentucky.

I've been paying attention to jury issues with the Mehserle murder case and the change of venue recently. Fruitvale BART is less than a mile from where I live.

That's an excellent point, because it raises the question of values. We've established the fact that we have a problem excluding people from the jury pool based on race. Does that only hold true for minorities?

The Oscar Grant tragedy does put an interesting spin on the role of race. Note that the venue change was not because there was concern that everyone would want to convict Mehserle; it was because opinions were split across race lines.

Indeed, this case sort of turns every expectation backwards. I thought the issue about which county would get this case was interesting. Having lived in both places, I don't doubt that Mehserle's lawyers would have preferred San Diego over LA.

Well, L.A. has the Rodney King incident legacy, which could hardly be ignored.