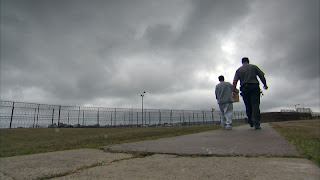 The Released, a Frontline production, examines how mentally ill inmates fare after their release from prison. Filmed in Ohio, the film follows up on five men who are being let out of prison and their trials and tribulations in homeless shelters, group homes, and state mental institutions.
These experiences are shadowed by the "Great Decarcerations" of the 1970s. Following the invention of Thorazine, and under a philosophy highlighting free choice and freedom, various U.S. states began closing down their mental institutions. Some readers may recall Ken Kesey's One Flew Over a Cuckoo's Nest as a cultural harbinger and representative of this ideology.
The problem was that no viable alternatives were created. Medication is a suitable alternative to prison only if one is sure to take one's medication. And, in many such cases, the organization and cognitive presence required for consistently taking medication is lacking.
Several of the people interviewed in The Released manage shelters and group homes, and while they have plenty of good will and energy to help, their powers are limited if one of their residents decides to take off. These places are ill-equipped to supervise medication; the only place who does a decent job at it is the mental institution, and therein lies the paradox; once medicated, the inmate is functioning well, and therefore released, whereupon he ceases taking medication again, leading to a new incarceration or hospitalization.
According to the movie, a million inmates in the U.S. are mentally ill. Thinking about our local problems, one can only guess what the incarceration experience is like when surrounded with so much dysfunctionality. Is it possible that the Plata/Coleman descriptions of flawed mental health treatment are actually better than what the inmates are to expect on the outside?
An aspect portrayed, though not deeply explored, in the movie, is race. We see a white man -- the only uplifting, redemptive story in the film -- obtaining a placement at an excellent group home, Bridgeview Manor, with great facilities and conditions. All other residents are also white. At the end of the movie we see him doing well. The other people portrayed in the film -- black inmates -- are not so fortunate; the shuttle from shelters to jail and back, and some face further tragedies. The extent to which race and class play a part in placements, and as a result, in the hope of a regulated, supervised life, is disturbing. But more disturbing is our notion of what counts as "good". There has to be a point of balance between unnecessary paternalism and laissez-faire abandonment of people to their fate. I fear we are not there yet.
You can watch the full movie right here on the PBS website.
Posted by Hadar Aviram at 9:40 PM

Thanx for this post (am no longer working in the prison - for now... back in community mental health) --- There are numerous studies that reveal what type of programs, and support are successful with individuals with severe mental illness.

The problem is not that we (mental health clinicians) don't know or understand the issues around treatment, and successful community living - we know, and can easily implement programs that would both 1) keep individuals out of hospitals, and 2) keep the mentally ill out of prisons (or at least significantly reduce the rate of incarceration).

The problem is lack of funding - we know that by providing an intensive level of clinical case management, reasonable housing, medication management will lead to significantly improved lives for millions of mentally ill (and reduce costs at state level by reducing incarceration). But funding for these programs are repeatedly cut, and mental health clinicians are repeatedly told that next year's budget will only be worse.

The result is also a devaluing of the mental health profession, and the hiring of less qualified personnel - who are paid less, not licensed, and are not able to provide the kind of clinical services necessary.

It is also true that in prison, as horrible as it is, the mentally ill are provided with medications, and there is a structured environment - this is indeed "better" than being out on the streets with zero support. And many of the mentally ill inmates are aware of this, and some do not want to be paroled, because they don't want to get into trouble again, and the fact that they don't know where to go...

The Parole Outpatient Clinic that are charged with providing paroled inmates with mental health services, are severely limited in their scope -as is their model for service delivery.

I personally would advocate for increased specialized programs that would be run by county mental health systems - with funding provided by the state... But also with the expectation that the county mental health system would provide salaries and benefits that are at par with the state system. Otherwise, if they just hire "cheap" unqualified clinicians, it can and will make matters worse.

There are solutions, but they require investment - with returns to be expected few years down the road.

Thanks for this thoughtful comment. The movie definitely makes the case for more funding, because it contrasts the rather expensive, ideal facility, with the less professional, unsupervised shelters. There seems to be good will across the board, but without professional supervision it is impossible to ensure that folks take their medication.