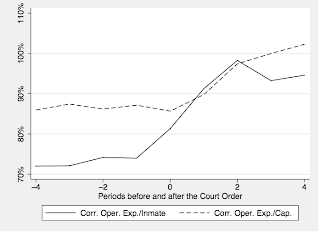 I've just returned from the Fourth Conference on Empirical Legal Studies, held at University of Southern California. The whole thing was absolutely fascinating, and the papers were top notch. I will probably refer to some of these in the days to come, but the one most pertinent to our blog is Richard Boylan and Naci Mocan's interesting paper Intended and Unintended Consequences of Prison Reform. Analyzing data from many states (predominantly in the south) that were ordered by federal courts to reduce prison population, Boylan and Mocan find that complying with these orders required an increase in correctional expenditures. The graph in this post depicts the "jump" in expenditures after court orders, compared to states that were not subject to such orders.
Now, where did that money come from? Unfortunately, from welfare. The increase in expenditures on prison improved condition within walls, but outside, it led to cuts in welfare programs. Worse, after the period of court supervision is over, the money is not returned to welfare. The irony, of course, is that prison reform and welfare target mostly people of the same social class, and once conditions improve and the population is released, folks come out to a world that offers them little in the way of help and assistance.
Granted, there are a few things that are difficult to control for even in a project as tightly designed as this one. One of these is the content of the court order. We know that population reduction methods vary according to their costs. Good credits will probably not cost as much as, say, out-of-state incarceration. These things make a lot of difference. Perhaps the policymaking lesson to be learned is that courts can and should leave states less free reign when ordering population reduction, and in the planning stage, consider the possible effects of these methods on the remaining state budget.
Posted by Hadar Aviram at 2:13 PM

Prison reforms don't always coincide with other factors such as law and sentencing reforms. Then there are other economic, educational and training reforms that have to be worked on as well. You can have the most well educated and trained work force but it means little when companies out source those jobs.