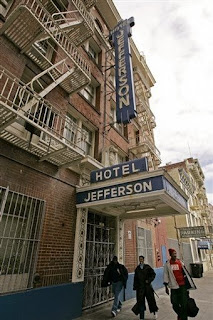 
One of the less reported developments following the elections was the failure of Prop L, which aimed to provide more financial support to the Community Justice Center. As reported this morning, Opponents of the new court, led by Supervisor Chris Daly, are gathering some momentum, encouraged by Prop L's failure. Others, however, point to the broad consensus behind a court that aims to solve social problems in the Tenderloin, and to the flaws in the opponents' position. The CJC is still scheduled to open in February; stay tuned.
Posted by Hadar Aviram at 7:17 AM