The Greening of Prisons? 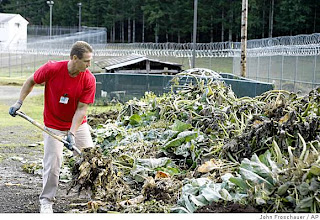 (image from Chronicle article)
The Chronicle reports today of an interesting trend in some prisons, albeit not in CA: greening, composting and recycling. In Indiana, North Carolina, and Oregon, prisons are installing solar panels, using energy-saving equipment, and composting food scraps.

While this is, in principle, a cost-saving measure, it has had some heartwarming "side effects." The Chron reports:

The responsibility of caring for the prison's three hives of Italian honey bees falls mostly to Daniel Travatte, 36, a soft-spoken former drug addict who is serving 10 years for attempted armed robbery.

Under the supervision of prison counselor Vicki Briggs, Travatte has learned to harvest honey - which inmates occasionally eat with breakfast biscuits - and use beeswax to make lotions. He's become an expert on their habits.

"I'm trying to change myself," said Travatte. "A lot of people go through prison with no intention of changing. I love working with the bees. It keeps me busy. I have a lot of responsibility to take care of."

While there isn't scientific evidence that such activities are helping inmates, Nalini Nadkarni, an environmental studies professor at Evergreen State College in Olympia, Wash., notes anecdotal evidence that it's working.

"They were stimulating their minds and having conversations that were different than 'How much more time we have left?' " said Nadkarni.

While Cedar Creek went green out of economic necessity - it had to conserve because it didn't have the wastewater capacity to expand four years ago - it is now embracing other benefits, said Dan Pacholke, a state prison administrator who helped implement many of the practices.


What about CA, which has pioneered greening efforts in so many other arenas of public and private life? 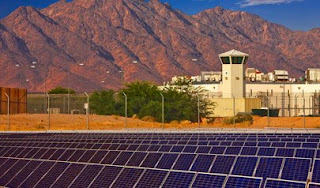 (image from CDCR website)
Well, as per this press release from CDCR, a series of energy-saving projects, including solar plants, are beginning to be implemented in prisons. These seem to belong more in the cost-saving family of changes; no composting, not to mention no community gardens or beehives. One can only hope that someone at CDCR will see the broader perspective and involve the inmate community in greening efforts; something very good might come out of this, beyond saving money.
Posted by Hadar Aviram at 8:00 AM