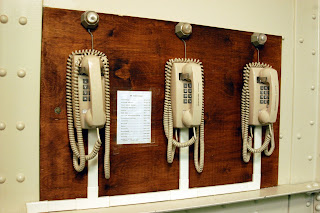 Execution chamber phones photo courtesy cdcr.ca.gov
Yes, you have read correctly. As the Chron reports this morning, while Governor Schwarzenegger makes more cuts to the legislative budget, he also approves the plan to rebuild Death Row, a project with an estimated cost of $356 million dollars, with a suspected $39 million dollar overrun. Some more details:

Without double-celling, the auditor's report said, the new Death Row will be filled to capacity in 2014. But the report said double-celling raises concerns of safety and privacy, and that a survey found that only one other state, Oklahoma, double-cells condemned prisoners.

The budget that legislators sent to Schwarzenegger would have prohibited construction of the new Death Row until the state determined, in a court ruling or a formal opinion from the attorney general, that it would be allowed to double-cell Death Row inmates.

Another budget provision would have blocked the project until the state resolved a lawsuit over prison overcrowding. The suit is pending before a panel of three federal judges in San Francisco, who have ruled that overcrowding is the chief cause of poor health care in state prisons.

We have blogged about the Death Row project before. Conditions in Death Row have only recently reached constitutional threshold. Several states, citing costs, have abolished the death penalty or set moratoria on it. Quite an assortment of commentators, from Jonathan Simon to Republican lawmaker Tom Harman, have pointed out (for different reasons) the need to abolish the death penalty; the ACLU has pointed to its costs as only one of many reasons why abolition is long overdue. What can I say? To say I think pouring more money into this particular form of punishment, rather than doing away with it, is a bad decision, is the understatement of the year.
Posted by Hadar Aviram at 9:12 AM

Again, the "critical thinkers" have left the scene. Why is it CA has so much difficulty electing officials who can be proactive thinkers, rather than reactors? After working for CDC for several years, I believe I know some of the people the govenor is listening to and they only react. We need to abolish the death penalty. We need to parole those who have been rehabilitated who have indeterminate sentences, so they can help us pay the taxes to get us out of the current mess. We need law changes about sentencing and we need to remember that inmates are human beings and are like the majority of "free" people, capable of change.

Thank you for commenting, PenRoss. I would think that the time to push the costs angle on this is now; do other readers agree?

this is outrageous. UC workers are getting fired, state workers are getting furloughed(or however the hell you spell it), education is being slashed, state spending is being cleaved across the board and the governator has the audacity to fund a new death row facility? Christ, commute their sentences to life, let out the non-violent drug offenders and save some money. I don't know who to be madder at: the idiot or the idiots who voted for him.