A Solution in Search of a Problem? More Sex Offender Legislation Dies in Committee 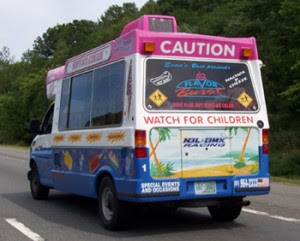 CA Assemblyman Paul Cook's legislative proposal - the newest version of sex offender legislation - died in committee. The novelty? Forbidding registered sex offenders whose offense included a child under 16 to sell ice cream. As is often the case with this sort of bill, it is presented as prompted by a particular incident, reported on Cook's website, where "the Megan's Law database revealed that a local ice cream truck driver was a registered sex offender".

Senator Mark Leno's questioning at the Standing Committee on Public Safety addressed the necessity of this new venture.

Current law says a registered sex offender whose offense involved a child under 16 cannot work "directly and in an unaccompanied setting with minor children on more than an incidental and occasional basis."

"Where is the weakness in that statute that ... you believe we're going to have registered sex offenders selling ice cream to our children?" Leno asked Cook Monday during a committee hearing. "I don't think there's any problem with the current statute."

But Cook said that leaves some ambiguity because an ice cream vendor isn't working with children in the same way as a day care worker.

Cook said the issue is particularly important because children are attracted to ice cream trucks and tend to trust those who operate them.

Sen. Roderick Wright, D-Inglewood, who voted for the bill, said an ice cream vendor can build a relationship with a child that can later lead to exploitation or an attack.

Leno called Cook's bill "a solution in search of a problem."

In response to Leno's question whether there were actual examples of sex offenders operating the trucks, Cook mentioned the case that allegedly inspired the bill, but Riverside County Sheriff's officials denied having heard of the situation. Read more at The Sun.

It should probably be mentioned that a similar law was being considered in Iowa last year. Follow this one up to its probable doom at the CA legislation website.