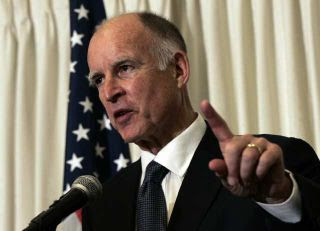 With Gavin Newsom's departure from the gubernatorial race, the serious Democrat candidate left standing is Jerry Brown, former Governor and current Attorney General. While the options may still be open, Brown's recent record with regard to the prison crisis merits some attention.

Brown is familiar with the correctional crisis, which has existed throughout his career as a public official in the state. The number of prisoners per capita increased throughout his previous gubernatorial positions, and his current position as Attorney General has required paying close attention to CDCR, particularly in the context of the Plata/Coleman ruling. Immediately after the original order in August 4, Brown declared his intent to appeal it, and he was closely involved in devising the state's plan for submission to the panel, a job which exposed him to petitions from rights organizations to comply with the order.

Brown's vast experience in the political system has solidified his array of friends and foes. In his position as Attorney General, Brown has worked to terminate Kelso's receivership of the prison health system, calling his plans "wildly excessive" :

“The court should terminate this unaccountable prison receivership and its $8 billion construction plan, restoring a dose of fiscal reality to the provision of inmate medical care in California,” Brown said in a prepared release. “The federal receivership has turned into its own autonomous government operating outside the normal checks and balances of state and federal law.”

On the other hand, the CCPOA's relationship with Governor Schwarzenegger, which was rife with animosity, is likely to be considerably better with Jerry Brown as governor. Like the CCPOA, he strongly opposed Proposition 5, which advocated treatment options for nonviolent drug offenders.

Californians are already familiar with Brown, and will take into account his position on a variety of matters. As one example of many, Brown considered Proposition 8 constitutionally indefensible and urged the court to void it. Nevertheless, we should be attentive to the way the prison crisis will be presented by the different gubernatorial candidates. This situation should exit the invisible realm and be confronted with practical, creative plans by whoever will be at the state's helm.
Posted by Hadar Aviram at 7:24 AM

I will NOT vote for Brown...no way!

I guess the question is, then, what the alternatives are. We'll keep track of the gubernatorial race and post some information on the correctional policy records of the candidates.