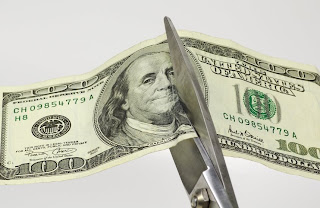 That is the budget cut for CDCR. Today, CDCR Secretary Matthew Cate announced his plan to cope with the significant reduction in corrections budget. As reported on this morning's Chron, Cate,

tasked with finding $400 million in cost savings, unveiled proposals Friday to save money by reducing the number of parolees by 30,000 and the state's prison inmate population by 8,000 by next summer.

We knew this was coming for quite a while; Secretary Cate mentioned the dilemmas involved in crafting the plan back in late March. The objecting parties are, as expected, victim advocacy groups and the prison guards union.

There are no details of the plan yet on the CDCR website, but once the full plan is posted, we will analyze and comment. Stay tuned.
Posted by Hadar Aviram at 5:19 PM

This is a start. Lets just hope that this becomes policy.

See the newer post for more details, Jerry. I'll do my best to keep you all posted.