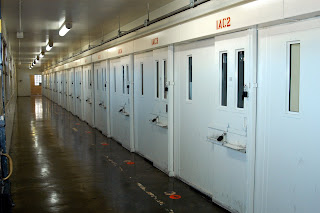 Some of the recent discussion of prison costs has to do with the expenses associated with running San Quentin's Death Row. As some of you may recall, a planned expansion of Death Row, deemed costly, was killed by a bipartisan initiative last year. The struggle around the planned expansion occurred against the background of 30 years of litigation regarding conditions on Death Row.

Yesterday, the Chron reports, Judge William Alsup of the California District Court ended this lengthy era of court supervision, after ruling that the improvements made to Death Row were enough to satisfy constitutional requirements. The improvements included getting rid of dirty water and rodents.

The nation's largest Death Row now houses 665 men. Only 10 inmates were held there when the suit was filed shortly after capital punishment was reinstated in California in 1977.

Fama said the inmates' original complaints were dirty and decrepit housing and a system that classified all condemned prisoners as security risks who had to be confined to their cells nearly 24 hours a day.

The 1980 consent decree required prison officials to evaluate condemned inmates individually and allow the less-dangerous ones the same exercise time and visiting privileges as non-Death Row inmates. It also required improvements in food, medical care, cells, showers and access to a law library.

As the Death Row population multiplied, the state periodically sought to end court supervision. But a series of reports by judicially appointed monitors over the years found a variety of violations, including a flawed cell assignment system that led to violent clashes and disciplinary rules that sent offenders to "strip cells" wearing only a pair of shorts. 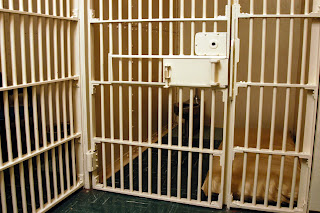 One thing that strikes me as interesting is that the improvement in conditions consists, in some respects, of making the Death Row experience more like "regular" life imprisonment. Does this reflect a realistic understanding that Death Row has become no more than a very lengthy imprisonment period, with a possible (but not certain) ending by execution? The time between sentencing and execution has gradually increased since the reinstatement of the death penalty in 1977. San Quentin Death Row currently houses 665 men; between 1977 and 2008, 14 men were executed. The recent trend we have documented, of cost-driven moratoria on the death penalty, is complicated by the costs of death penalty-related litigation (Brandon Garrett of Virginia Law School presented an interesting work on this, in its early stages, at the Conference for Empirical Legal Studies last year); one possible scenario is that, at some point, Death Row will quietly become a thing of the past, and conditions (as well as inmates) will be indistinguishable from those pertaining to life without parole.

This actually has a precedent; after the Roper v. Simmons decision, which rendered the death penalty for juveniles unconstitutional, all death sentences against juveniles were shifted to Life Without Parole (for an argument that Roper deems LWOP unconstitutional for juveniles, as well, check out what the good folks at the Sentencing Law and Policy Blog have to say). The cost argument may be supplemented by some studies that doubt the efficacy and humaneness of death by lethal injection. 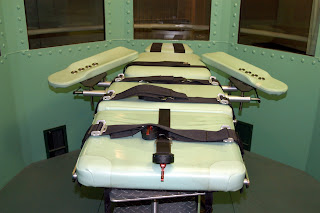 In any case, the improvement of conditions may make Death Row more akin to the general population prison, and may be an invisible step toward a CA moratorium that will go beyond a de facto lag in executions.
Posted by Hadar Aviram at 6:55 AM

The main litigator for the prisoners and one of the founders of the now famous "Prison Law Office" at San Quentin, described the original settlement (Thompson v. Enomoto, 1979) as "the best of the country"...Are the conditions at SQ decent?

This remains to be proved and it's not easy as CDC refused that any real field work be conducted there.

All the best, your blog is great!

Hey, Simon! How good to see you here.

This is interesting; at our conference last month, Judge Karlton offered several reasons as to why the litigation over health and mental health services is so endless. His take on that was that bureaucracies take a long time adjusting to fix a situation that's no one's priority.

I wonder if the health services litigation will also take 30 years to end, or whether it will never end... the complicating factor in the latter is the receivership and its complex relationship with CDCR.

Mixing Death Row inmates with general population will not necessarily improve their conditions, as the main criticism of SQ conditions (and there are many) has to do with horrific overcrowding: http://www.npr.org/templates/story/story.php?storyId=92296114.