Humonetarianism in Action: Fiscal Arguments in Support of Regulating Marijuana 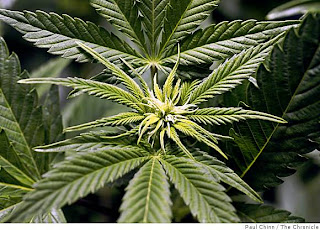 It's Deja Vu All Over Again.

The long discussion on regulating marijuana is back, as the Chronicle reports today. Except this time, true to the spirit of Humonetarianism, much of the discussion focuses on finances and costs.

Experts say an unprecedented confluence of factors might finally be driving a change on a topic once seen as politically too hot to handle.

Among them: the recession-fueled need for more public revenue, increased calls to redirect scarce law enforcement, court and prison resources, and a growing desire to declaw powerful and violent Mexican drug cartels. Also in the mix is a public opinion shift driven by a generation of Baby Boomers, combined with some new high-profile calls for legislation - including some well-known conservative voices joining with liberals.

Leading conservatives like former Secretary of State George Shultz and the late economist Milton Friedman years ago called for legalization and a change in the strategy in the war on drugs. This year mainstream pundits like Fox News' Glenn Beck and CNN's Jack Cafferty have publicly questioned the billions spent each year fighting the endless war against drugs and to suggest it now makes more financial and social sense to tax and regulate marijuana.

This is not a new discussion, of course. As some readers probably know, marijuana prohibition has not been with us forever. Scholars who have researched the history of drug criminalization, such as Troy Duster, trace it back to clashes between economic interests, as well as to demonization and oppression of minorities. In fact, the first U.S. law to criminalize drugs - the Harrison Narcotics Act of 1914 - focused on regulating taxation and licensing for drug purveyors and on protecting the medical profession, rather than on blanket prohibitions. Duster argues that it is no coincidence that substances used by middle-class whites, such as barbiturates, were left out of the criminalization frenzy, while marijuana (linked to Mexicans), heroin (linked to Blacks), and opiates (linked to the Chinese) became outlawed.

So, there's nothing given, or immutable, about our prohibition of drugs. Well, is it a good idea? That is a very complex question, since we could think of quite a variety of legalizing/regulating regimes to implement. In their wonderful book Drug War Heresies, Rob MacCoun and Peter Reuter examine a series of drug policies from all over the world and show that each system has advantages and drawbacks. They also highlight the political and economic hurdles to implementing sensible drug policies. Another interesting resource is this cool and well-articulated economic analysis by Andrew Clark from DELTA, who argues that any cost/benefit based analysis of regulating the drug market has to take into account the importance we ascribe to externalities, such as crime and ill health. Jeffrey Miron from Boston University argues that decriminalization will have little impact on marijuana use, and believes that decriminalization might affect other legal provisions, such as eliminating or relaxing the reliance on drug testing to determine parole violations.

We should keep in mind, though, two important things pertaining to the California situation: First, California has already effectively decriminalized small amounts of marijuana, although, as Rob MacCoun brilliantly proves in a new piece, not many people know that. And second, there is a permit system for medical marijuana operating according to CA laws (albeit in defiance of Federal laws).*

One of the things I like about the resurfacing of the marijuana regulation debate is that, probably for the first time, public discourse is attentive to the big picture. As became clear at the CCC conference, a major problem in addressing correctional policy is the disconnect between lawmaking and correctional implementation; lawmakers do not feel the harms and costs that are later born by those subjected to the correctional apparatus, and as humonetarians argue, by those picking up the tab. It's nice that the prison overcrowding issue has made it to the forefront of the marijuana debate.

One of the economic arguments supporting decriminalization which is not new, but somehow is always left out of the discussion, is the fact that criminalization creates the black market which everyone is troubled by.

It was Prohibition in the 1920s that helped create Al Capone by creating a whole market for gambling, prostitution, and alcohol that financed his empire. Assuming actors are rational, if you legalize and regulate these behaviors, you reduce the incentive for a person to go to illegal sources thereby subsidizing the black market.

Ex:
Would a rational actor pay $10 for Illegal Drug X, and possibly go to jail, or would they pay $12 for legal Drug X, without that risk?

The rational actor, depending on how risk averse, will usually prefer the regulated legal alternative because its not worth risk and danger of attempting to get it from illegal sources, even at a nominal premium ($2 in my hypo).

Therefore, the black market associated with drug cartels, gangs, etc which is financed by drugs would be diminished greatly if people obtained regulated narcotics through legal means. That would narrow the demand for illegal drugs.

Moreover, if you could obtain these drugs through a regulated means you can reduce the chances of getting fatal mixtures, perhaps funnel people into rehab programs, as well as have cleaner needles (for example) thereby reducing the spread of STDs and other diseases (which then spread to wives, husbands, and partners who had nothing to do with the illegal activity).

Throw in the arguments about the waste of resources prioritized by our system to the prosecution of the war on drugs, and you have a compelling argument. So to me, it is definitely socially optimal to legalize drugs.

You know, Steve, that's partly why I'm fascinated by the medical marijuana market. I am told by my medical marijuana users, of which I have none, that there are doctors in the Bay Area whose sole occupation is to provide people with the necessary paperwork to obtain a card they can then use to register with the dispensers.

The substance itself, I'm told, is no different from what's available in the market, but is much more expensive. So, the question becomes: how much more would a user be willing to pay in order to avoid the unpleasantness of street traficking as well as risk of getting caught? This depends on a long list of variables, including enforcement policies.