Legalizing Medical Marijuana Sales: Habits in the Shadow of the Law 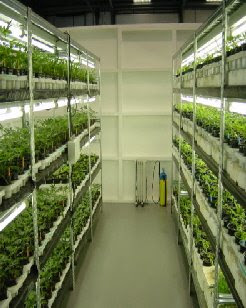 (image courtesy Stichting Institute for Medical Marijuana in the Netherlands, at medicalmarijuana.org)
The reemergence of the marijuana legalization debate, which we covered earlier this week, has been invigorated by San Francisco Supervisor Ross Mirkarimi's legislative proposal, under which the City's Department of Public Health would distribute pot through city clinics. The argument, as so many other criminal justice related arguments these days, has shades of humonetarianism:
"We're spending much more money keeping marijuana underground, trying to hide a fact that is occurring all around us," Mirkarimi said. "Now is the time to take responsibility for something we've deflected to others and to test our ability to take responsibility."
What is the legal stauts of medical marijuana in California? This informational webpage from the Department of Public Health explains is quite plainly. One can obtain marijuana from a licensed dispensary using a medical marijuana ID card. The card can be obtained at San Francisco General Hospital (incidentally, where UCSF scientists working with HIV patients found them unharmed by medical marijuana use). It costs $103, and requires some medical paperwork, or "an original letter from a medical provider stating that you have a serious medical condition where the use of medical marijuana is appropriate". 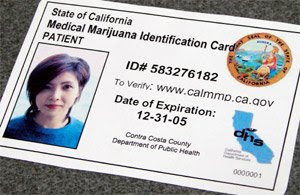 (image courtesy Contra Costa Health Services)
Forging the card is a criminal offense, but some anecdotal evidence I collected this week suggests there's no incentive to forge; getting medical recommendations is very easy, and several physicians in the Bay Area make their living exclusively from such recommendations. The relationship between the physicians and the dispensaries are much less straightforward. Patients who come to obtain a recommendation are not told the locations of the dispensaries. Not that it is a big secret that requires being "in the know": the cannabis club directory is online.

However, matters are complicated by the fact that federal authorities do not recognize SB 420, which created the dispensaries. Therefore, despite its legal (albeit quiet) status in California, and oversight by the city, the feds still can (and do) raid dispensaries occasionally. The question is, therefore, whether dispensing the drug through the municipality would discourage the feds from paying attention to the market.
For a broader historical perspective on the marijuana market, I strongly recommend Eric Schlosser's Reefer Madness: Sex, Drugs and Cheap Labor in the American Black Market.
Posted by Hadar Aviram at 8:58 AM

The laws are still very confusing in California. Hopefully things will get cleared up in the future. It's funny how it would be a lot simpler if marijuana were just legalized.
For those who are in California and looking for a medical marijuana doctor, we've got 7 doctor's offices where you can get an ID card. Check it out!
http://www.marijuanamedicine.com