More Humonetarianism on a National Level: What About Us? 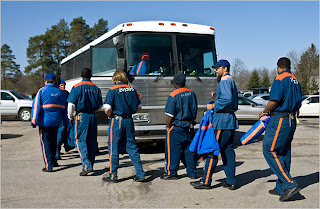 This New York Times piece from a couple of weeks ago highlights another aspect of humonetarianism: To cut costs, states close prisons down or switch to community programs. Here's the "local interest" bit:

In California, where Gov. Arnold Schwarzenegger, a Republican, has called for $400 million to be cut from the state’s corrections budget, officials are seeking to remove low-level drug offenders from the parole supervision system and to provide them treatment options instead.

Like other states making such changes, California is led by a governor who long opposed such shifts in prison policies. But Mr. Schwarzenegger, as well as other leaders and lawmakers who are far more conservative, has come around to a view held by advocates of sentencing and prison reform that longer sentences do little to reduce recidivism among certain nonviolent criminals.

“In California we are out of room and we’re out of money,” said the state’s corrections secretary, Matthew Cate. “It may be time to take some of these steps that we should have taken long ago.”

But we are by no means the thriftiest state. Other states have been examining prisons to see whether they are efficient, and are closing them down. And other states are also reforming their sentencing laws, particularly minimum sentences for drug offenders. Many concede that the big waste of money is parole and are cutting down on supervision.

A few thoughts on some of the trends in the piece:

I remember many times I would have left the state if I had no parole, maybe that would become a criteria for no parole.

It might, anonymous; except then it basically becomes a question of displacement (are we pushing potential parolees out of the state?)

There was many things about parole that didn't work for me. Being trapped to the area I was addicted to drugs Which is why I kept committing crimes to get more of.