The Aftermath of Chino 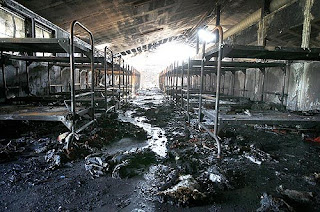 
The L.A. Times report on the Chino riot provides some insight into the extent of the violence and destruction, but very little in the way of cause, beyond the volatile combination of overcrowding and racial unrest.

It was the kind of explosive violence threatened throughout the state's 33 prisons, which are packed with nearly twice as many inmates as they were built to hold. The destruction wreaked here has served to intensify pressures throughout the penal system as at least 1,100 Chino inmates have been moved to other prisons.

The prison remains on lockdown, in a "state of emergency," Hargrove said as he picked his way through the riot scene.The two dormitories hardest hit by the clashes are surrounded by yellow crime scene tape. Trash bags line the chain-link fence topped with concertina wire. Olive-clad security officers comb the grassy field with metal detectors, looking for weapons the prisoners might have buried during the four hours that they had control of the area.

Corrections officers got word that violence was brewing at the prison, prompting a lockdown imposed Thursday night. Tensions between Latino and black prisoners flared two days later, according to officers here.

But in the end, inmates of every race were involved, leaving the cause of the clash unclear, said Terry Thornton, spokeswoman for the California Department of Corrections and Rehabilitation.

My colleague Jonathan Simon, over at Governing Through Crime, comments:

My observations (limited) of California corrections in recent years is that race operates as a default way to manage risk (for both the prison system and the prisoners) in a system of mass incarceration which has both lost any semblance of traditional prisoner community, and has failed to provide a secure and dignified life within a penal complex to which hundreds of thousands are consigned for years and many tens of thousands for decades of their lives. This basic lack of planning for anything but warehousing bodies has been exacerbated by the systemic overcrowding that has brought the system under federal court control.
Posted by Hadar Aviram at 11:37 AM