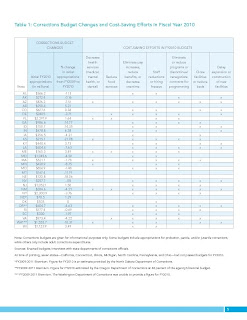 How much effort are other states making to save on corrections?

The Vera Institute of Justice conducted a survey, trying to establish the impact of the financial crisis on correctional policies. California was one of the states that did not respond to the survey, possibly because it had not yet enacted its 2010 budget. The full survey (only 16 pages and very much worth a read) can be found here in PDF format. Here are some of the highlights.

Second only to Medicaid, corrections has become the fastest growing general fund expenditure in the United States. Two million three hundred thousand people in the U.S. are now in prison or jail—more than one in 100 adults. On any given day 7.3 million adults are under federal, state, or local correctional control (including those on probation, parole, and other forms of supervision)—one in 31 adults. In FY2008, the most recent year data are available, states spent an estimated $47 billion of general funds on corrections, an increase of 303 percent since 1988. They spent an additional $4 billion in special funds and bonds and $900 million in federal funds, bringing total corrections expenditures to nearly $52 billion. (p. 2)

The basic cuts can be seen in a chart from the report, which I lovingly converted to JPG for your convenience (click on the image to clearly see the chart). As you'll see, at leats 23 states have taken on cuts in their correctional operations. The executive summary identifies most of the activity as occurring in three areas:

Operating Efficiencies: Though many state corrections departments squeezed out efficiencies during the last recession, they are trying to eke out even more savings now. States are reducing healthcare services or joining in purchasing agreements to lower the cost of inmate pharmaceuticals. Many states have reduced corrections staff, instituted hiring freezes, reduced salaries or benefits, and/or eliminated pay increases. Others
are consolidating facilities or halting planned expansions. Still others are eliminating or downsizing some programs.

Recidivism Reduction Strategies: High rates of failure among people on probation and parole are a significant driver of prison populations and costs in most states. To cut down on new offenses and the incarceration of rule violators, several states are strengthening their community corrections systems. Many states began these efforts in the past few years as part of the national emphasis on helping people successfully return to the community following their release from prison. States are now bolstering both their reentry programs and community
supervision programs and working to improve outcomes for people on supervision.

Release Policies: The biggest budget savings come from policy changes that impact how many people come into prison and how long they stay. Staffing typically accounts for 75 to 80 percent of corrections budgets, so substantial cost reductions can be achieved only when the prison population shrinks enough to shutter a facility—whether a single cellblock or an entire prison. In FY2010, states looking for large cuts have turned to release policies and found that they can identify some groups of people who can be safely released after serving shorter terms behind bars.

The report also anticipates further cuts, in the form of transitioning to non-custodial alternatives.