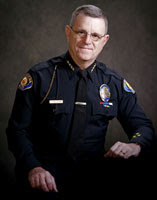 (image courtesy City of Pasadena Police Department website)
This remarkable statement, by Bernard Melekian, President of the Police Chiefs Association, has been circulated quite widely. I reproduce it verbatim for you.
A few comments: I think this is a fine example of the fact that, as Rahm Emanuel (in)famously said recently, we don't want to let a serious crisis go to waste. If something good has come out of all this, it is the willingness of different parties to thoughtfully and systematically examine what we have been doing so far and where to go from here.
***
Because of all of the information out in the press and at the capitol, I wanted to reiterate Cal Chiefs' position on the Corrections Budget legislation. It is important to note that in spite of the various rumors and allegations, our position has not changed in the last few weeks. The floor letter we sent on the 19th is attached again as a reference, and our comments to Jillena Eifer, the Police Advisor to Assembly Member Pedro Nava, appear below to clarify our points on the issue:

"As you can see, the underlying concepts of Alternative Custody and Banked Parole are fundamentally sound, and the Police Chiefs Association believes that those details can be ironed out. What IS critical is that the legislative language implementing the Corrections Reduction package be transparently and openly shared. I strongly believe that the various groups who have issues concerning the Corrections package can iron out all of those details in a constructive fashion that enables the legislative goals to be achieved in a fashion that also protects public safety.

The Sentencing Commission issue is the most troubling part of the package. First, we do not believe it ought to be linked with the Corrections Population Reduction package, at all. One piece does not relate to the other. We are willing to sit down and discuss the Sentencing Commission issue as a free-standing matter, unrelated to the Corrections Reduction package. With respect to the Commission, we believe it is possible to negotiate a construct that is consistent with the long-standing position of the California Police Chiefs Association (and virtually every other law enforcement organization) and also assures that there is a serious examination of California’s sentencing structure.

Bottom line is that I believe that all of the dissenting law enforcement organizations are of the same mind – constructive solutions are possible if only policymakers will take a deep breath and engage in collaborative discussion of the Corrections package. If Assembly Nava can successfully communicate that to legislative leadership, we could then spend the next few days in serious discussion to craft a package that would meet everyone’s needs, rather than engaging in the counter-productive efforts of trying to squeeze 41 votes for a package that could be a consensus item if there were only open discussion."