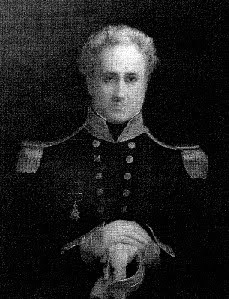 (image courtesy ACT Corrective Services, http://www.cs.act.gov.au/)
In May 1840, Alexander Maconochie, a Scottish administrator with a Navy background, was appointed to run and manage Norfolk Island, . Norfolk was, at the time, one of the toughest correctional institutions in the British empire, housing hardened violent criminals who were sent to Penal Australia.
Maconochie's correctional ideology was quite revolutionary for the time. Firm in his belief that punishment without reform was a socially empty act, he sought to generate a system under which convicts would earn their own freedom through "marks", which they would earn for good behavior and hard work. The "marks" could be used to purchase luxuries beyond a diet of bread and water, or to purchase one's freedom. The imprisonment experience, beginning with a period of solitude, would gradually loosen as convicts rose from level to level (or tighten back for those who "slipped"), to the point of being a closer simulation of life on the outside.
In his three years on the island, Maconochie had created a culture of learning and improvement within Norfolk. The library was stocked with books and prisoners would congregate, read and debate. Theatrical productions were considered. Musical instruments were ordered. Contrary to the previous practice of anonymous graves, headstones were placed on deceased prisoners' graves. Queen Victoria's birthday was celebrated as an island holiday, during which the prisoners were free to roam about the island.
Maconochie's methods produced prodigious results with regard to recidivism rates. During his tenure at Norfolk, he discharged 920 of the twice-convicted offenders; by 1845, only twenty of them had been convicted again. However, these methods, which were initially endorsed by the Empire, became increasingly controversial. Critics complained that inmates were not receiving enough punishment in the initial statements and were horrified to hear about the island holiday. Under much political pressure, Maconochie was sent back to England in late 1843.
Revolutionary rehabilitative systems sometimes work, but they seem to be contingent upon strong personalities with strong convictions, and don't tend to survive political pressure. Another example is Thomas Murton, a thoughtful administrator and criminologist who revolutionized the Arkansas prison with similar ideals in mind, and whose work at the prison is depicted in the fiction film Brubaker.
So, could such a system work in California prisons? One of the mechanisms considered for inmate release relies on good work credits. A National Conference on State Legislatures report examines the various mechanisms for credit earned. At least 31 states offer such credits in one form or other; usually, state legislation authorizes the correctional authorities to define which programs merit earned time. 21 states reward education and 18 states reward work (California provides credits for disaster relief work). Some states, like Nevada, Pennsylvania and Colorado, have actually expanded their reliance on such systems, due to budgetary difficulties (humonetarianism in action!). The amount of time earned (how many days of participation are required for one day of early release) also varies from state to state, and also, within a state, between different programs. California offers day-for-day in some programs, and others sometimes provide more than a 1:1 credit ratio.
Do these programs affect recidivism? Several evaluation studies done on good credit programs found no significant difference in recidivism rates between early released inmates and inmates who served the full term. In fact, one study even found a significantly lower recidivism rate for those who were released on good credits.
To read more about Maconochie, read Norval Morris' terrific book Maconochie's Gentlemen.
Posted by Hadar Aviram at 4:01 PM