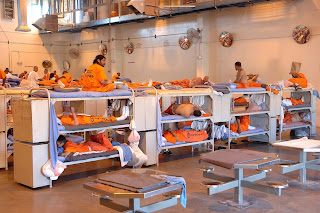 The panel answers this question in the negative; while, as the decision states, it is impossible to anticipate what kind of effect the order will have on public safety, the court believes there are ways to craft a reduction plan that will not compromise the state's responsibilities to protect the public. The panel makes the following points:

The experience of imprisonment in an overcrowded institution itself has a criminogenic effect; therefore, reducing its scope might actually benefit public safety. The current incarceration experience backfires in terms of protecting the public, by being a "petri dish" for crime. Overcrowding hinders the possibility to properly classify inmates, thus housing them according to levels of risk. It also hinders the inmates' access to rehabilitation programs. Under such conditions, inmates learn new criminal behavior while "doing time", which actually increases recidivism rates.

Rather than mindlessly throwing the prisons' doors open, there are thoughtful ways to reduce population without compromising public safety. The court agrees that a wholesale release of inmates without a thoughtful plan is not a good solution. It proposes several ways to reduce prison population without compromising public safety: credits for good behavior and achievements, which act as an incentive to pursue rehabilitation options; diversion of technical parole violators, who constitute a large population of returning inmates; diversion of low-risk offenders with short sentences; sentencing reform; increasing rehabilitative programs in prison; and modifying statutes. The court points out that most of these have been endorsed by the state; faithful blog readers will probably remember them from the Governor's reduction plan of 27,300 inmates, which we discussed here. The plan, therefore, need not be all that different from the Governor's plan, save for the fact that the reduction is larger in scope.

The assumption that community resources will not suffice for containing the released inmates is exaggerated. The panel considers several ways in which the community might be affected by population reduction. It concludes that the releases will not have a significant impact on population in local jails. They also state that parole supervision would not be affected, since many of the problems with it stem from inadequate resource allocation, particularly from an unnecessary focus on low-risk parolees and technical violations. The court also rejects the (cynical?) assertion that rehabilitation/reentry resources will be taxed by the reduction, noting (cynically?) that the considerable financial savings from a population reduction could be put to good use creating more rehabilitation and reentry programs, thus contributing to public safety in a more effective way.

There is no evidence of a significant relationship between early releases and a rise in crime rates. Empirical evidence presented by experts supported the conclusion that "population reduction measures have been adopted in various states without an adverse impact
on public safety". This alleviates concerns over the order's potentially adverse impact on public safety.

There is no public safety reason to exclude mentally ill inmates from the release order. Numerous experts supprted the assertion that community-based treatment is a better strategy to handle mentally ill inmates. While it is possible that some mentally-ill patients may do better being treated within people rather than outside, this is not true for many others, whose treatment will be more effective - and cheaper - outside prison walls. The release plan could take these classifications into account, by crafting, for example, good credits so that "only those mentally ill individuals with the greatest level of psychiatric stability and the greatest potential to “voluntarily” follow up on outpatient care would be eligible, at least until appropriate community programming is in place."
Posted by Hadar Aviram at 7:24 PM

My husband begged for outside treatment for his mental health issues that have caused his incarceration, however, was told nothing was available for his care, only prison. He would be willing and grateful to be monitored at home while recieving care through outpatient services.