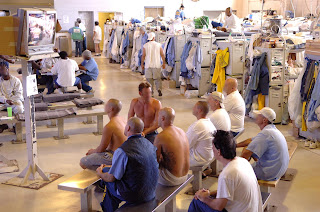 I'd like to conclude this series of posts by pointing out a few strengths and weaknesses of the panel's decision. These are important to keep in mind, since the decision will undoubtedly be appealed to the Supreme Court.

All in all, my impression is that the panel not only made a brave, no-nonsense decision, but it also supported it quite firmly and thoroughly. The opinion does not beat around the bush, and it addresses each of the PLRA concerns with a well-supported array of data. Moreover, the decision benefits from using the defendants' own experts and plans. After all, there could hardly be a disagreement about the population explosion as a key complicating factor in each and every aspect of prison life, certainly in providing essential services; the government more or less has conceded it, and its own plans to deal with overcrowding are remarkably similar to those proposed by the court. The only difference seems to be in scope.

I see three main issues that may be brought up against the decision on appeal; two of them can be easily addressed, and the third one is rather open to speculation.

First, the court has rejected the government's argument that it has already intervened quite dramatically in the matter by appointing the receiver and special masters, and yet, it has argued that these institutions will still have plenty of room for improvement and hard work after the overcrowding crisis is alleviated. This argument coudl be said to undermine the statement that overcrowding is the primary reason for the dysfunction .The proper response to this argument, I believe, is to differentiate between necessary and sufficient factors. While alleviating overcrowding is an essential factor in improving medical services, it is by no means sufficient, and much work - staffing, construction, generating best practices - will still need to be done.

Second, while the three-judge-panel's jurisdiction emerged from a discussion limited to the medical system, the judges may be said to exceed these limits by discussing other ills of the prison system, such as the broken parole apparatus and recidivism rates. However, a close reading of the decision reveals that these additional issues are addressed as a direct response to PLRA requirements; recidivism rates and other issues are not discussed in and of themselves, but in the context of public safety and remedy feasibility.

What seems to be a problem, though, is not so much the language of the decision or its reasoning, but its timing. The order was given days after the Governor came up with a reduction plan of 27,300 inmates. Since the court itself states that no number is "magical", a possible argument before the supreme court could be that the reduction the state is willing to embrace is "enough" of a reduction. The answer to the "how much" question is rather difficult, and I can see the Supreme Court, in the spirit of federalism and state autonomy, leaving the amount of releases to the (already exercised) discretion of the Governor and prison authorities. Those who rejoice in the panel's courageous decision today should hope that its reasoning for the percentage of reduction will stand.

We'll have to wait and see.
Posted by Hadar Aviram at 8:03 PM