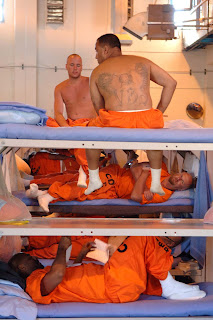 1. Is overcrowding the primary cause for the medical system's dysfunction?

The court reponds in the affirmative. It starts by noting that "[a] prison system’s capacity is not defined by square footage alone; it is also determined by the system’s resources and its ability to provide inmates with essential services such as food, air, and temperature and noise control". It then moves on to explain the causal link between overcrowding and poor medical services, not before mentioning that four former CA prison administrators testified in support of this assertion.

The testifying administrators pointed out to several ways in which overcrowding hinders health care. First, the decision mentions that, in general, overcrowding leads to a set of priorities impacted by various emergencies, thus relegating health services to a lower place in the list of priority.

Second, the court emphasizes several problems stemming from the lack of space: the inadequate use of reception centers to house inmates rather than treat them, the severe shortage of treatment space, and the inability to place inmates according to classification because of space constraints. This is a problem particularly with respect to mentally ill inmates, who "languish in clinically inappropriate settings".

Fourth, there are other ways in which overcrowding hinders care. Understaffing is a problem not only with respect to medical and mental health stuff, but also with respect to the custodial stuff expected to keep the peace and escort inmates to receive medical treatment; the pharmaceutical system is unable to keep up with delivery demands; there are huge backlogs in receiving specialty medical care; and the growing need to rely on lockdowns as a way to keep the order hinders the provision of medical care during such times.

Finally, the impossibility of manually filing the huge number of medical records leads to inadequate record keeping, which leads to chaotic administration.

The panel then draws a line of causality between the overcrowding and some of the horrendous examples of preventable misdiagnoses, disease exacerbation and preventable deaths. It also points out that overcrowding exacerbates the plight of mentally ill prisoners. A variety of experts - including former prison administrators, prison scholars, administrators, physicians, and psychologists - are cited as supporting the causal link. Moreover, the court points to the litigation history in the Plata and Coleman cases as proof of the worsening of the situation, due to overcrowding, despite efforts to improve medical care with other measures.

2. Is there really no other way?

The court's response, in a word, is no. As support, the panel examines a series of alternative measures, pointing out their inadequacy as solutions to the problem.

First, the panel states the inadequacy of further construction as a remedy to the problem. Currently, there are no plans to build new prisons; re-entry facilities would take years to build and would not provide immediate relief; and building medical facilities is now compounded by the financial crisis. In general, construction is inadequate because it could not be completed in a timely manner, though if it were to be completed, it could be part of the solution.

Second, additional hiring is, according to the panel, impractical, given the difficulty of filling in current vacancies. As the decision points out, the overcrowding issue in itself discourages new hires, and a less crowded system would be more conducive to quality hiring.

Third, the court responds to the state's argument that the appointment of the receiver and special masters has been enough. While some progress has been achieved, it hs been slow. The receiver and special masters themselves testified as to how overcrowding has hindered their ability to improve the system. In addition, since solving the crowding problem will not immediately make the medical system's deficiencies disappear, their services will still be needed after the acute difficulties are resolved.

The panel also rejects the state's reliance on shipping inmates out of state as a solution, not only because of the small numbers that can be accommodated, but also because of the unknowns regarding the standard of care in those states.

More in Part III.
Posted by Hadar Aviram at 4:46 PM

While I agree with the court's assessment ...with respect to mental health (and i read the opinion which was strong on mental health) - my fear is that the issue will not be addressed comprehensively. There is a reason why an estimated 40-50% (or more) of the inmates are seriously mentally ill. This has to do with continued cutbacks of mental health treatment in the community settings.

IF we see a number of inmates being released who are mentally ill, and no corresponding services developed in the community - we will only see
large numbers returning to the prison - and CDCR will say something like "told you so" etc.

Reform needs to take place not only within the prison system, but also in the community - specialized programs for seriously mentally ill have to be developed at a much larger scale. I'm not at all confident that CDCR is upto such a task, it would require a complete overhaul of the parole outpatient clinic - and its failed model.

I think, though, that county mental health, with additional $$$, can develop programs - they have the experience, and infrastructure to do so... Such programs could still maintain close links with parole agents, but with the understanding that mental health treatment is a longer term process - and rules of violation would also need to be looked at again.

CDCR has had more than ample time to develop mental health programs - and they've failed. There is a serious conflict of cultures and interest between custody and clinicians, they need to be separated - both within the prisons and outside with regards to providing mental health services to parolees.

Thanks for your comment, Prison Clinician. I think the court (cynically?) points out later in the decision that the saved money from population reduction could be used for developing community programs.

As an Ex. prison clinician, I understand the hesitancy this writer expresses. As I wrote in another comment, I know prisoners with severe psychotic disorders are receiving only Visteril (an antihistamine that sedates) for their psychosis. This is also administered only at bedtime to quiet the tier or if the inmate is extremely loud and disturbing staff. Hence, they are not receiving mental health treatment (this is only one example). Like many, I hoped there would be changes with the leadership of the receivers. There may be in some areas, but not all and certainly not permanent changes. For those in power, the mantra is as always to just wait "them" out, and we will continue as before and "I told you so".

CDC will see that those who are released are ones who will recidivate so they can tell the public we get what we deserve. I find many custody and administrative staff interested primarly in taking a pay check home only. The inmates who would be less likely to re-enter are those with long sentences and who have decided they can not continue to live as previously. Most of these inmates are Indeterminant sentences or XXX-to-Life sentences( not all, but many, reach this level of rehab. even in this atmosphere of no formal CDC rehab. Great Britain has performed significant research and proven this. How is it we can not believe rehab. works and human beings are capable of change?
Maybe, some day, we the people of the United States of America will accept the responsibility of caring for those who we lock up. I certainly hope so. I like to think we humans accept others as being human and not sub-human, and therefore less deserving than we, because they are less fortunate than we.

Just a clarification, neither the Plata reciever nor the Coleman special master testified. I think you must be referring to earlier (ie. before the 3-judge trial) reports each had issued.