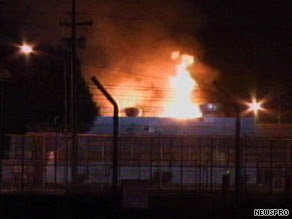 Some of you may have heard of the recent riot at Chino prison. The L.A. Times reports:
Staff continue to evaluate the extent of inmate injuries and damages to state property following the riot that occurred on Saturday, Aug. 08, 2009, with inmates at the California Institute for Men, Reception Center West Facility.
Thirty-eight inmates of the initial 55 inmates who were transferred to local community hospital for medical treatment for more serious injuries have been returned or are en-route back to the institution following medical treatment.
CNN reports:
None of the facility's employees was hurt in the melee, which broke out at about 8:20 p.m. Saturday at the Reception Center West facility, Hargrove said. Guards used pepper spray, "less lethal force, and lethal force options" to regain control by 7 a.m. Sunday, he said.

The scene of the violence was the medium-security housing facility with seven units, each of which houses about 200 inmates, he said.

Some 80 officers responded to the riot, during which a housing unit was heavily damaged by fire, he said.

CDCR reports are here and here. There is also a little bit of background on Chino:

I should probably add - if anyone has any light to shed about the riot, please do so in the comments.