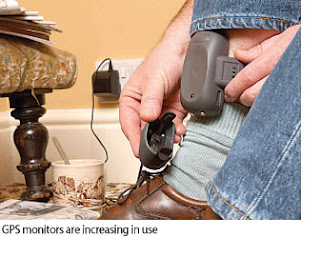 (image courtesy CDCR)
Yesterday, the CDCR website featured a press release about the use of GPS monitoring to preclude sex offenders from attending the California State Fair. This is an addition to a series of reports about the increase in using GPS monitoring systems to track down parolees and offenders on bail. As one might expect, the focus of supervision has been, in the last years, on sex offenders (read this fascinating 2006 report by Jesse Janetta on GPS usage on San Diego sex offenders), but its uses exceed this category. A while ago, we reported the intent to use GPS systems to follow domestic abusers on restraining orders in California; according to the New York Times, this seems to be a growing trend in other states as well.

The appeal of electronic monitoring is quite understandable. The technology itself is readily available from commercial providers, and, once the system is set in place, the marginal cost of adding parolees to the pool of supervised subjects is not overwhelming. It is certainly less time consuming than adding one more file to the already overflowing docket of parole officers. However, it is important to keep in mind not only what GPS is, but also what it is not.

Let's be clear - cell phones equipped with GPS units are considerably more compact than these ankle-bracelet monstrosities. These things are as much about marking out "sex offenders" as yellow stars and scarlet letters were about marking out scapegoats in earlier ages.

What happens when a cuffed individual goes into a GPS dead-zone (of which there are many), cuts his bracelet off and walks away? How long will it take for the watchers to notice? What happens when someone captures a GPS unit's identification, makes dozens of clones which are then attached to birds or balloons or rats and released? Suddenly the watchers are seeing dozens of the same person in dozens of locations. What happens when the state is sued when some vigilante uses the GPS system to track and kill someone?

Oh, and let's not overlook the cost of GPS monitoring. It may be less than the cost of keeping someone in prison but after (the idiot tested, moron approved) Prop 83 passed, the state made it clear that it expected the counties to pay and the counties made it clear they had no money to pay for the program. The various levels of govt. had better get this sorted out before large numbers of current inmates are tagged and released.

GPS monitoring of in individuals may have some benefits but only if the legislature is far more thoughtful about it than it has been so far.

These are all valid points, Zot, and you're right - we need to think about our level of reliance on technology in anticipation of the expected inmate releases. Technology can help, but is is not a solution to the recidivism/reentry problem.