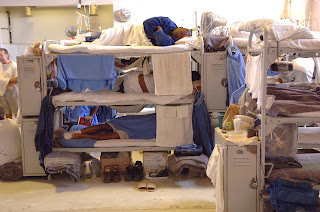 The panel then moves on to figure out which remedy would be enough to solve the problem, and yet no more than enough; the statutory limitation requires them to craft the least intrusive measure possible. While they believe that the plaintiff's request for a reduction to 130% capacity is "reasonable and finds considerable support in the record", they opt for a lesser level of reduction. Establishing that the cut should be between the levels of 130% and 145%, they opt for a cut to 137.5%.

1. Where should population be reduced?

The panel considers, and rejects, the possibility of requiring population reductions in specific institutions: "[T]he constitutional violations identified by the Plata and Coleman courts exist throughout the California prison system and are the result of systemic failures in the California prison system". Moreover, "defendants have never contended that the problems at issue in Plata and Coleman are institution-specific". In addition, the panel sees specific institution capping as micromanaging, and potentially more of an intrusion into the state's ability to manage its prison population than an overall cap.

2. How should population be reduced?

The process for planning the population reduction is a combination of collaboration and coercion: The plan will come from the state, but be modified by the court with input from the plaintiffs and other parties, and the courts will retain jurisdiction to ensure compliance or modify further. This model, which was proposed by the plaintiffs, leave the state with some flexibility about the best mode of reduction, and follows similar orders given in other cases.

3. How much population reduction is necessary?

Aaaah, this is the $64,000 question. While the panel believes that the plaintiffs' request for a reduction to 130% capacity is "reasonable and finds considerable support in the record", the decision opts for a lesser level of reduction. The panel cites Dr. Craig Haney, who pointed out, in his expert opinion, that “there’s nothing magical” about any specific percentage, including 100%. The court points out that even in institutions at 100% capacity there are problems stemming from crowding, and that California prisons, by design, are unable to provide an appropriate level of care to even 100% of the population. However, the panel mentions that the plaintiffs requested a reduction to 130%, relying on plans drawn by the Governor's own personnel. Experts' estimates, however, wavered between 130% and 145%. The latter, according to some of the testimony (including Haney's, in response to some wardens' suggestions), is a very conservative estimate of what would be required, taking into account physical space and staffing. The court phrases its final estimate as follows: "Rather than adopting the 130% limit requested by plaintiffs, we will out of caution require a reduction in the population of California’s adult prison institutions to only 137.5% of their combined design capacity – a population reduction halfway between the cap requested by plaintiffs and the wardens’ estimate of the California prison system’s maximum operable capacity absent consideration of the need for medical and mental health care. At the adult institutions’ present design capacity of 79,828. . . (CDCR weekly population report as of August 27, 2008), this equates to a population of just below 110,000. Should the state prove unable to provide constitutionally adequate medical and mental health care after the prison population is reduced to 137.5% design capacity, plaintiffs may ask this court to impose a lower cap. Similarly, should it appear that the provisions set forth in the plan adopted by the court will not achieve the expected population reduction, plaintiffs may seek to have the plan amended."
Posted by Hadar Aviram at 6:55 PM

I AM IN DESPERATE NEED OF HELP! (PLEASE) GO TO THE U.S. DISTRICT COURT NORTHERN DISTRICT OF CAL. AND READ THE ACTS OF MEDICAL AND PSYCHOLOGICAL TORTURE THE CDCR COMMITTED AGAINST ME ... SO AS TO CONCEAL FELONIES THAT THE STATE OF CALIFORNIA HAD COMMITTED: RE: BRAVO V. CDCR DIRECTOR, ET. AL. C-12-6414JSC; C-12-6459 EWC; BRAVO v. COUNTY OF SAN DIEGO, ET.AL.; C-12-6460 JWC.

CONTACT ME AT : vjbravo0064@yahoo.com ; if you can help me fight these civil actions.